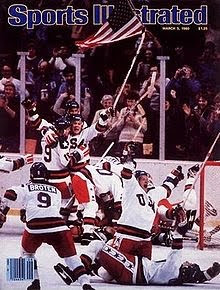 I had a really early start with a client this morning, but instead of being good and going to bed early last night, I couldn’t resist sitting up to watch the battle for the last Olympic Gold, an ice-hockey match between two giants of the game, USA and Canada.
The original Miracle on Ice occurred when at Lake Placid in 1980 the Americans beat the Soviet Union, the overwhelmingly dominant country in the sport at the time. Of course then it was much less about sport and much more about politics. And about what was right and what was wrong. In those days the Americans were the country of democracy where natural justice prevailed, whereas the USSR was a Communist Dictatorship where human rights didn’t exist. Beating the Russians in ice-hockey at Winter Olympics was a victory against oppression.
We may view the world rather differently today and last night’s match between ‘Team USA’ and the hosts, Canada, was by no means comparable. But it mattered. It mattered a lot to a smaller country to beat their neighbouring super power. This is something I, as a Finn, can relate to.
Finland lost so many ice-hockey matches against the Soviet Union in the 1960’s, 70’s and 80′ that rumours began to circulate that we weren’t allowed to win. It would be politically too damaging. Whatever the truth, we didn’t just lose matches against the mighty USSR, but were also regularly beaten by the Swedish team. The Swedes, who still wear an emblem of Three Crowns on their shirts, to show their reign over other countries, such as Finland, are about the same level in talent as we are. But as we border each-other, the contests are invariably bitter.

Watching the match last night, I was sorry I’d missed so much of the Olympics. I didn’t even see Finland win ice-hockey Bronze, beating Slovakia in a seemingly nerve-shredding match. (Sweden, just for the record went without medals…result!) The fast and furious game played on dangerous-looking skates and often involving gratuitous violence took me back to my childhood. Not so romantic, you may think, but as we lived close to a newly built ice-hockey hall, I was often taken to matches by my Father, or went to see one with a friend. I supported a local (best) team, Ilves. I had the green and yellow scarf, bobble hat and gloves. And I wore them proudly.
Until, that is, we moved to Stockholm and I became more interested in girly things. My Father’s last ditch attempt to reinvigorate my interest in the game was to take me to ‘Maa-ottelu’ a Derby match between Finland and Sweden, staged in Stockholm. We were one of the few Finns in the audience, in a sea of blue and yellow Three Crowns -shirts. Finland lost the game 13-0 and ice-hockey was never again mentioned in our house.

Are you enjoying the Sochi games?

Football and the elusive book deal