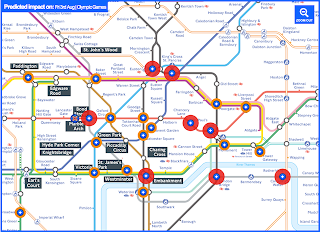 The Olympics are nearly upon us and so I thought I’d give you a little personal guide to how to get around in London.

Before I start I should make it clear that I have the worst sense of direction of any person I know. I couldn’t find my way out of a paper bag and often get lost in London.

Because of this, I never leave the house without my iPhone; that little blue dot on the digital map has saved me many a time, although the 3G reception in London is appalling and can fail you when you are most in need. So I make sure I prepare, prepare and prepare.

The best way to find out how to get from a to b in London on public transport is to use The London Transport site. Apart from the many maps and general information, the part of the site I most use is the search facility. It gives you the best route on the tubes and buses, which will have the shortest walk underground on stations when changing tubes, and it will even give you a little map for each change. They also give you an approximate time, which I find is always more than adequate, especially as I’m quite a fast walker. All the same I give myself another 10 minutes, and print a map of the place I am going to. I know this sounds excessive, but I hate getting lost and being late.

London also has so called Boris Bikes – named after the London Mayor, Boris Johnson, which you can rent for half an hour at a time. I haven’t yet used these but would think that they are a lovely way to get a different view of London.

There are a few apps which I use while on the road.

1. The LJP app will give you the same info as the site, including status of the tube and overground lines and buses, a tube map and other useful bits and pieces.
2. Bus Checker, which gives you routes and a live bus timetables.
3. Tube Pro is an app for the severe control freaks. It gives you the tube carriage you should take to be closest to your exit at the other end. (I don’t have this, but the Englishman loves it).
4. Barclay Bike App which tells you where you can find the Boris Bikes and live status on how many are available where. (As above).

There are also a few useful things to know when travelling by public transport in London:

1. Always let people off the tubes, trains and buses before getting on. It’s polite and it makes sense.

2. Even if it doesn’t look like it, bus stops have a queuing system. I’ve once witnessed a man being quite firm with a woman and her two teenage children who tried to queue jump. I can’t repeat his words here, but be assured the woman and her off-spring made their way dutifully to the back of the queue.

3. Most busses do not sell tickets: you have to buy them in advance from machines at the bus stops.

4. All buses, tubes, overground and trains have an effective system of telling you what the next stop is. On the tube the woman even tells you which side of the train the next platform is.

5. When crowded, the tube can be hellish, especially if it’s very hot. Often it’s easier to get on a bus, or walk. In the centre of London tube stops are very close to one another, so it’s worth checking on a map how far your destination is. But if, in a crowded compartment, you find your nose precariously close to a tall man’s armpit, don’t even think about making eye contact or cracking a joke about the situation. In London it’s just not done. Try to pretend you’re alone on the train, everyone else does.

6. As a Londoner, I use an Oyster card, a prepared travel card, which can be topped up at tube stations or newsagents and similar shops. It costs a little to buy one, but it is the simplest and cheapest way to get around. But there are day travel cards, and single tickets, all of which can be bought from the underground stations.

No-one really seems to know how London’s public transport will cope with the additional crowds that the Olympics will bring. There are many people proffering the chaos theory both publicly and privately. There’s even a comedy TV series on the preparations for the 2012 games, something that could only be done in Britain. (Brits do like to laugh at themselves.) But I think we who live in London will all do our bit to make the visitors feel welcome. I am a huge supporter of the Olympics, and believe that the games are a resolutely good thing for London.

So enjoy your visit, whether you are coming to London for the games or just for the shopping, and use the public transport. It’s cheaper than taxis, it’s much better than it was, say ten years ago, and it makes you feel like one of the locals!

London a friendlier city during the Olympics?