It’s taken me all day to write this blog post about my wonderful, luxuriously long break ‘at home’ in Finland and Sweden. The words just haven’t flown today, on my first day back in London. Even the internet has been intermittent – something to do with the large full moon, perhaps? 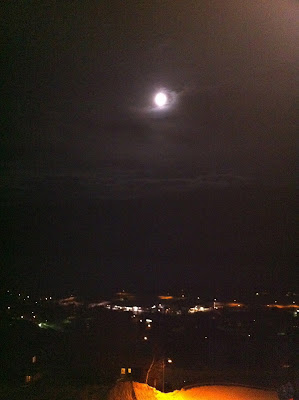 Or it may be that I am mourning leaving my home again, although last night I couldn’t wait to get back to London and my home here. One of these days I have to really decide what to call ‘home’…
Then there’s just too much to describe: the deadly freezing conditions on top of Yllästunturi on the fourth day of my holiday, when the weather at the ski centre was gorgeous, sunny with a slight breeze, but which on the top of the mountain turned into a bitterly chill, biting wind. It had its advantages as no-one, including me who is prone to some soul-searching (and praying – I’m not a natural slalom skier), wanted to linger by the ski lift before starting the down-hill glide.
Then there was the bliss of the sauna after each day’s efforts on the mountain, the heat soothing the aching muscles. Followed by some delicious food: Arctic perch baked in the oven followed by frozen wild berries covered in hot fudge.

The first week flew by. My body and soul mended by the calming effect of the Lappish air, there was a complete change of scene. I travelled down (and across) to Stockholm where the Englishman joined me for a weekend. We both flew into Arlanda airport from opposite sides of Europe, keeping in touch with texts and emails. Looking forward to the rendez-vous took me back to the many airport reunions we’d had. We held hands like young lovers in the taxi on our way into the city.

The following day Stockholm was hit by the same cold winds that we’d tried so hard to escape on the slopes in the North. Temperatures plunged and there was a constant threat of a snow storm. This was nothing compared to the awful catastrophe in Japan. While we tried to follow events on the other side of the world through various mobile devices, newspapers and TV, we walked around the city, me reminiscing (as always when here) about my childhood in the Swedish capital. It takes me just about a weekend to get acclimatised, to find my way around without a map, something I hate referring to in a place that I used to know like the back of my hand.
We were both a little under the weather, me with a nuisance of a cough. To escape the cold we flitted from one coffee place to another (of which there’s no shortage in Stockholm). We did manage to visit the Strindberg museum on Drottninggatan 85, which was as fascinating as I thought it would be. It’s housed in the great Swedish author’s last home and has been painstakingly recreated to look exactly as he had it when he died in 1912.
Since writing an essay about August Strindberg in sixth form in Helsinki, I’ve had a strange obsession with the author. He’s known for being a misogynist. He married three times and after each break-up wrote bitter accounts of the relationships. He thrived on controversy – writing offensive remarks about anything and everything. This in itself is highly ‘un-Swedish’ and must be part of the reason why I find Strindberg’s work and life so arresting.
The rest of the week in Stockholm I spent with my mother, milling around the old places again. We went to the newly hip Södermalm, the southern part of the city, made even more famous and popular by Stieg Larsson who set all his Millennium novels here.  I go there mainly to buy jeans from Gul och Blå, but also because this is part of Stockholm that I don’t know very well. It was definitely out bounds for me when I was a teen. Then Slussen, the first tunnelbana (underground) stop on the south side of the city, was populated by (Finnish) drunks brandishing a knife, or prostitutes brandishing scant clothing and red lipstick. Now it’s the start of the trendy, arty part of town. How things change?
The last – but by no means least – leg of my Nordic adventure took me to Åre, the Swedish ski resort near the Norwegian border. But more about that tomorrow.