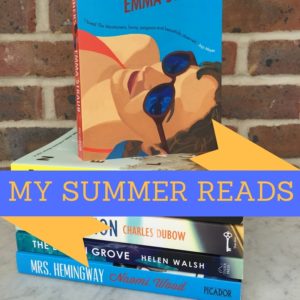 As you know if you read my (bit of a cheat) mid-holiday post from Provence, I have been on a self-imposed internet detox for the past two weeks. Contrary to my fears, the world hasn’t forgotten about me (hurrah), and my books sales didn’t completely collapse during the break either. So, what did I do instead of posting a constant stream of images on Instagram? You guessed it, I read a lot of books! And this time, to go with with the non-digital holiday theme, I bought good old-fashioned paperbacks to take with me. It helped that we took the train down to South of France, so the weight of my luggage was not an issue.

For my holiday reads, I wanted something to help me escape to warmer climes (London was decidedly chilly and rainy two weeks ago). I also decided the stories should have nothing whatsoever to do with politics. I needed to forget all about the Brexit vote, the economic meltdown and political turmoil. Sadly, we couldn’t quite escape world events when towards the end of the holiday we heard the awful news from Nice, just a few miles further South from where we were. My heart goes out to all those who were involved in the horrors.

But let’s get back to the summer reads.

First up is a novel about the arty Manhattan smart set holidaying in Europe.

The Vacationers by Emma Straub is  story of a dysfunctional New York family who, mainly due to the strong-arm tactics of the mother, high-achieving author Franny, are taking a last holiday together in Majorca before the youngest daughter, Sylvia, goes off to college. But it slowly transpires that Franny may have other motives for insisting on the two-week summer break in the Balearics.

As the sunny days turn into humid nights, secrets, which each member of the extended family would rather keep to themselves, begin to unravel …

I couldn’t put this book down and very nearly finished it before my holiday. Straub is a master at describing friendships and tricky interconnecting family relationships from all points of view, making none of the characters the villain of the piece, whatever their transgression. Making mistakes in life is part of being human. The Vacationers is an uplifting book on all levels.

Next is  a novel based on real events – just my kind of book.

I’ve always been fascinated by Hemingway, and even more so by his wives. Or, rather, the fact that he had four wives. The story of his love life has been fairly well covered in other books and films, so I wasn’t sure this latest book on the subject, Mrs. Hemingway by Naomi Wood, would bring anything new to the table. How wrong I was! The novel, inspired by letters Ernest Hemingway wrote to his wives (and lovers before they became his wives), is an intelligent and clever tale of the famous author’s many relationships. The fact that we meet each wife at the beginning, and at the end, of the relationship, when marriage and affair overlap, brings a new and tragic angle to the stories of these four remarkable women.

If you are a Hemingway fanatic like me, this is the book for you.

Now for something quite naughty …

If The Lemon Grove by Helen Walsh doesn’t get your juices going while holiday, nothing will. This is a steamy story of an illicit affair between an older woman and a younger man, again set in Majorca. (What’s with Majorca all of a sudden?)

I do love a good hot-under-the-collar tale on holiday, and this is certainly one of those. Whether I’d enjoy this kind of story with quite graphic sex scenes, combined with a weak plot, at any other time, is debatable.

I’m not a prude, but in my view the best sex scene ever written is the encounter in the library between the young lovers Cecilia and Robbie in Ian McEwen’s Atonement, where very few body parts are mentioned.

Enjoy The Lemon Grove but don’t say I didn’t warn you! 😉

I’ve left the best till last.

Indiscretion by Charles Dubow is a beautifully told,  heart-breaking story of fame, ambition, infatuation and love.

Clare is a young single woman working as an editorial assistant in New York when, during a weekend break in the Hamptons, she meets Harry Winslow, a famous award-winning author, and his beautiful wife, Maddy. The Winslows are of old New England stock and a little older. They met at Yale, and are deeply devoted to each other. Soon Clare begins to spend every weekend at the Winslows old beach house, and becomes one of their best friends. The Winslows call her their ‘project’ – a position Clare is more than happy to accept. She falls in love both Harry and Maddy and their fragile son, Johnny, but she is also infatuated by their upper class lifestyle of early evening cocktails and midnight swims, and effortless friendships.

But when summer turns into autumn and the Winslows announce they’re going to Rome for a year’s sabbatical, Clare is hurt and devastated; how can they drop her so easily? A few months later another chance meeting has explosive consequences for Clare and the Winslows as well as the narrator of the story, Maddy’s childhood friend, Walter. As the story unravels, we learn more about Maddy’s life before she met Harry, and also about the mysterious narrator, Walter, a bachelor and close family friend.

This book is possibly the best I’ve read this year. What begins as an almost ordinary tale of the rich and famous soon turns into a tragedy. The very personal narration adds a touch of unreliability. How far does Walter’s own emotions towards the Winslows and Clare colour the story? Can we trust his account of events?

Indiscretion is a very good novel, which will stay with me for a long while.

These are the books that entertained me during my holiday. Have you chosen yours yet?