Well, our lobster last night was phenomenal. So good that we decided to use the shells to make a base for lobster and prawn chowder. It was so delicious that I decided to share the recipe:

Begin by removing the nasty bits from the lobster, like the grey, feathery gills, and the sand sac from between the eyes. Then crush the shells as far as you can.
Fry a couple a chopped shallots, carrots and celery in a little olive oil. Add the shells, a garlic glove (thinly sliced) and a large beef tomato, chopped into small chunks. Fry for another few minutes, then add a small glassful of dry sherry and boil for 5 minutes. Next add enough water to cover the shells. Add a couple of bay leaves and season with salt and freshly ground black pepper. Bring to the boil and simmer for one and a half hour.
Strain the stock through a muslim cloth and leave to cool.

For the chowder I used stuff that I had in the fridge, including the prawns we bought at Billingsgate Market yesterday:

2 shallots
2 carrots
2 sticks of celery
Cubed pancetta – about 150 g (bacon would also do or you can leave it out all together)
200 g of baby new potatoes (any potatoes will do, including cubed baking ones)
Glass of white wine
1.5 litres of lobster stock (or any fish or vegetable stock)
Knob of butter and olive oil for frying
100 g of butter (brought to room temperature) and a tablespoon of plain flour
150 ml single cream (or double cream or creme fraiche)
A couple of bay leaves and salt and pepper to taste
Juice of half a lemon and
A small packet of dill to add just before serving.
And this is how to do it:
In a heavy based pan, fry the shallots, carrots, celery and pancetta in the oil and butter for a few minutes or until the shallots are translucent. 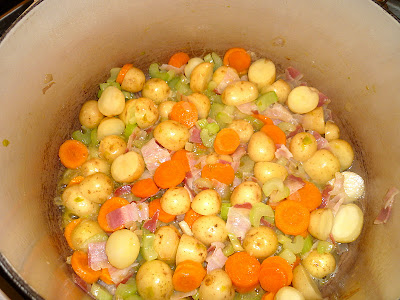 Add the wine and boil for another few minutes. Then add the potatoes and the lobster stock. Season with salt and pepper. Boil the chowder until the potatoes and vegetables are cooked.
Mix the flour with the softened butter. Take the soup off the heat add the paste into the chowder while whisking it gently so as not to break up the vegetables. Bring the chowder back to boil and simmer for a few minutes until the soup has thickened. Shell the prawns, removing the blue veins from each with the tip of a sharp knife. If using shop bought prawns you escape this long-winded process.

Cook the chowder until the prawns turn pink, add the dill and serve with freshly made aioli and bread. 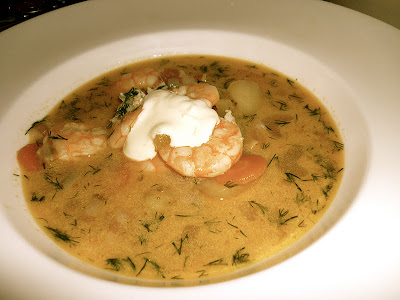 The Englishman said this was one of the best things I’ve ever cooked. Good start to the New Year?

Finnish comfort food for a chilly night in London