We rarely go out on New Year’s Eve. When the children were young we did what many parents of small children do – miss 12 o’clock altogether by nodding off in front the sofa, desperately trying to stay awake. Occasionally, especially when the children got older, we’d be invited to parties, or skiing (bliss!), or even have a party ourselves (in our old country house I was the Millennium party host – a memorable evening for many reasons….).

But we’ve never been keen on going out on New Year’s Eve, even when the children grew up and went their own ways. Instead of the difficulty with babysitters, there was the difficulty (and expense) of taxis to the middle of nowhere.

When we moved away from the country into London, I thought we’d take up going out again – there was no problem with babysitting or transport – the tube in London is free and runs all night. But last year – our first here in London – after umming and arring for the days between Christmas and New Year, we decided to try our local, The Holly Bush, in Hampstead. With post-Christmas budgets pinching us, a night in a pub would be less expensive than going out somewhere (proper), we mused. Typically for us, after some cocktails with Daughter and her friends at home (they were staying over in our flat), we walked to the pub and ended up buying a very expensive bottle of champagne on the stroke of midnight. So much for saving money…
This year the same umming and arring has been going on again. But after such an extravagant (and so worth it!) night out for Daughter’s 21st, we decided we’d treat ourselves to something nice at home and settle down in front of Jules Holland’s Hootenanny on TV instead. Then I had a bright idea: why don’t we go out to Billingsgate Fish Market in the morning to buy – hopefully – live lobster, and cook them for the evening? Why indeed not….
At 5 am this morning when the alarm went I regretted my bright idea, but after a cup of coffee I was up for the adventure. I’d always wanted to see the new Billingsgate market. I love fish, and I wanted to see if you really could barter for your supper. After a long and a lonely drive across the dark, empty streets of London, we finally reached the Isle of Dogs where the market is. And boy was it busy! There were obviously many other ‘private’ shoppers who’d had the same brilliant idea as us.
When we walked along the aisles we realised we’d forgotten to go to a cashpoint en route. After a quick count-up we mustered £40 in cash and hoped we could get at least two lobsters. But there weren’t many stalls selling this king of seafood. When we finally came across some, there were many other buyers. But we were relieved to find they were £18 per kilo. We bought two lobsters for £38-00 without even trying to haggle. It just didn’t seem right with so many other buyers circling the stall.

Then the Englishman found more coins in his pockets and we mustered another £15-00 for a box of uncooked king prawns, which we’d spotted earlier. At least here we were able to haggle and got the price reduced from £18. For two kilos of prawns that’s pretty good value. 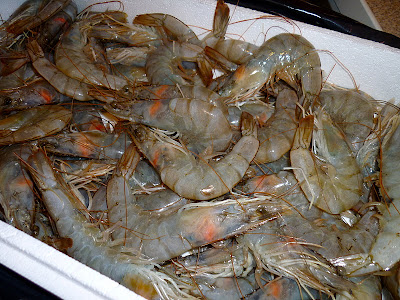 By eight am we were back at home, exhausted. I looked at the lobster and decided they needed to be dealt with sooner rather than later. We’d never cooked lobster before, but the Englishman is a dab hand at crayfish. Lobster is only large crayfish, right? After a reviving cup of coffee, we decided to boil up some water with a teaspoon of salt, some bay leaves, thyme and a squeeze of lemon. According to several sites on the interweb, each lobster should only take 15 minutes to cook.

With some home-made mayonnaise I think we have not only got a delicious meal for New Year a deux but also a meal of excellent value. The proof of the lobster will be in the eating, I’m sure. So wish us luck with our nearly self-caught supper. Lets hope it tastes as good as ‘catching’ it was fun!

Happy New Year To You All
and
Many Thanks For Reading My Ramblings Over 2011!