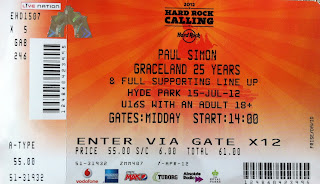 When, a couple of months ago, The Englishman, as part of my birthday gift, presented me these tickets for a summer concert in the park, I was thrilled. In fact, I might have shed a tear or two. The concert was part of the 25th anniversary of Paul Simon’s controversial and hugely popular Graceland album tour, and this was the music that framed my first pregnancy. In 1986 as I drove for an hour and a half each way from our flat in Southsea to my job at the BBC in Reading, the Graceland tape was nearly worn out, I played it so much. The Englishman also knew I’ve been a Paul Simon fan for a long time – ever since I heard Bridge Over Troubled Water when growing up in Finland.

With the weather this summer, however, we weren’t quite sure up till the last minute that the concert would actually go ahead. We’re also not particularly seasoned festival goers, and felt there was a huge lack of information on the timings. Obviously Paul Simon himself would be last to appear. We also knew from the Paul McCartney and Bruce Springsteen fiasco on the previous night’s concert when the organisers turned the sound off mid-performance (unbelievable??), that the music would definitely stop playing at 11 pm. But the tickets said doors opened at noon, with the event starting at 2 pm. And you weren’t allowed to bring any chairs, food hampers, cool bags or alcohol. And apart from the VIP lounge there would be nowhere to sit. Call me a sissy (not old!), but I didn’t think I would want to stand around (possibly in pouring rain) for a whole day, however much I loved Paul Simon.

So we made an informed decision to leave home at four pm, but when we arrived on the site at around quarter to five, we knew we were far too early. The place was about one tenth full of people making the best of the expensive bar and the manure smelling wood chip floor. Because after the unprecedentedly rainy summer we’ve had here in London, to prevent a mud bath at the Hard Rock Calling festival, the organisers had covered the whole of the area with wood chip. I reckon they’d got it from a farm somewhere because I was reminded of our old place in the country: I’d not smelled such musty scents since leaving the sticks. Come to think of it, to be spared this smell was part of the reason we came to London – or it was for me at least. (Oh, I am so shallow and have such a sensitive nose!)
‘Let’s have a beer,’ said The Englishman and I agreed; when in Rome…we found a free spot on the wood chip and settled down on our coats and cashmere jumpers (thank goodness for my poncho – it’s even perfect as a blanket). And then something wonderful happened: the sun came out!

After a couple of hours of warming acts, the stage began to fill with various instruments. When I heard an acoustic guitar being sound-tested I knew it was nearly time. The crowds were warming up too, everyone got up and began to pack in tightly around us.

I have to admit to another tearful moment when Paul Simon entered the stage. As his first number he performed one of my all time favourites, Kodachrome. Thank goodness I could hide my tears behind my sunglasses. I was straight back in my bedroom in Stockholm, where we then lived, and to my small portable record player which had been my 10th birthday present. After all these years, I was watching Paul Simon play live! I can’t describe the overwhelming feeling of joy I felt.

Paul Simon looked so good and sounded just like he did on my old record player and on my cassette in the car. And some! There was the addition of that little magic that a live performance always gives the listener; you know nothing can have been doctored with; even if you your idol is but a small dot in the distance, you know the screens around are of that person in the centre of the stage, performing just then, and there.

The rest of the crowd, a mixture of ages seemed to enjoy his performance too. When we left, a little early, we were surprised how many people were behind us.

So would I go to a concert like this again? Yes, but only if I can afford to shell out for the VIP seats – I think I might just be too old for the crowds and the hard wood chip floor…