Because our new flat is just that, brand spanking new – and modern – it was really difficult to decide how to dress the windows. My initial thought was to buy something called Silent Gliss Wave Curtains as the style I thought would fit the ceiling to floor windows, but there were several problems.

First of all the curtain fitter/rep (for a company I shall refrain from mentioning) didn’t turn up on the first meeting. On the next one he turned up late, then was so patronising that in the end I decided I’d not spend more than £6,000 on my new curtains! In fact the money would have decided the matter outright had their first quote not been misleading. Much time and effort would have been saved on both sides; but hey, live and learn?

My second idea was to fit Venetian blinds, but thought they might be a little too cold. The flat needed fabric to soften the effect of its newness and modern style. So I decided I’d go for Roman blinds.

After my experiences with the previous curtain company, I decided getting a recommendation would be the best route. I asked around and a local Crouch End furnishings shop which I like a lot, Little Paris, came up trumps. They recommended Jude Hoffman who works from a unit at the Wood Green Chocolate Factory.

In the same week that I phoned her, Jude came around to measure up the windows, sent me a quote the next day and when I accepted her prices (she is very reasonable – depending on the size of the window and fabric her prices are about £170 per blind), brought me some sample fabric books. And only about three weeks later she came around to fit my new curtains. All the stitchings are made by hand, and the batons covered in fabric. 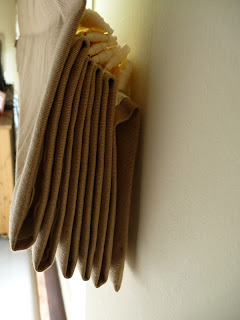 And here are the blinds in our lounge. What do you think? Aren’t they are lovely?