All of my Nordic romance novels are partly set in Helsinki, so I thought I’d take you on a pictorial tour of the city, as featured in The Nordic Heart Romance series of books.

In my latest title The Finnish Girl, Kaisa is 14 when she moves with her sister Sirkka and her mother Pirjo to one of the island suburbs of Helsinki, called Lauttasaari. Pirjo rents a small flat in ‘Laru’ as the area is fondly referred to by those living there. 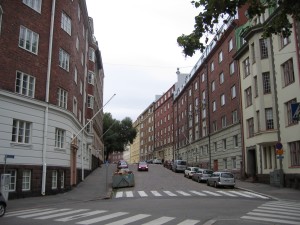 Lauttasaari is a 20 minute bus ride from the centre of Helsinki, and the Swedish School of Economics, Hanken, where Kaisa later is enrolled as a student. In the first novel in the series, The Englishman, Kaisa envies her new friend, Tuuli, who lives just a walking distance from the university in Töölö. She ends up spending many nights sleeping over in Tuuli’s flat, because she misses the last bus to Lauttasaari.

A place where I particularly love to set my 1980’s Helsinki scenes is the Happy Days Cafe on North Esplanade. When it opened in 1979, it was one of the new fashionable cafe restaurants, where you could have an alcoholic drink without ordering food. This, believe me, was revolutionary in Finland  in those days. The Happy Days Cafe still exists but is now called Baariteatteri (The Bar Theatre). 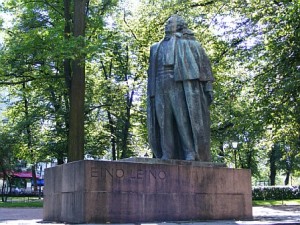 From the Happy Days it’s only a short walk to the statue of the Finnish national poet Eino Leino, where a very romantic and pivotal scene takes place in The Englishman. It’s where Kaisa and Peter share their first proper kiss and promise to see each other again. 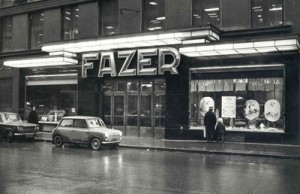 Another cafe which Kaisa visits in the series of books, is the Fazer Cafe on Kluuvikatu. This, a much more expensive and traditional restaurant cafe, opened in 1891 and is also featured in the fourth book in the series, which I am currently writing. (Title reveal coming up very soon, sign up to my Newsletter to be the first one to find out what it will be called!). The street was pedestrianised in the 1990s, but when Kaisa was in Helsinki in the 1980s it looked very much like the black and white picture here. 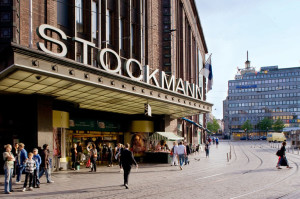 Stockmann’s department store is another place, which I use a lot in my novels. Kaisa has a rendezvous with The Englishman under the Stockmann’s clock, which is a popular meeting point in Helsinki. Kaisa also worked there in The Englishman, and the store is featured in all of my books. 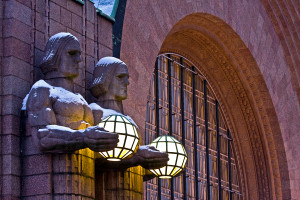 A place where Kaisa sheds many tears as she says goodbye to her beloved Englishman is the Helsinki International Airport at Vantaa. Even now when I arrive there, I have a lump in my throat when I think back to all those desperate farewells we shared there with my Englishman. But I couldn’t talk about leaving Helsinki without mentioning the most romantic place in the city – the Helsinki central railway station. I love the style of the building and the fact that it’s a working station, which is being constantly improved and restored.

Finally, I have to share a picture by Visit Finland/Niclas Sjöblom of the Helsinki Cathedral. Each time I visit the city, I take a few snaps but nothing like this one. The cathedral dominates the centre of Helsinki and here you can see it rising above a wintry mist in the South Harbour. Beautiful, isn’t it?