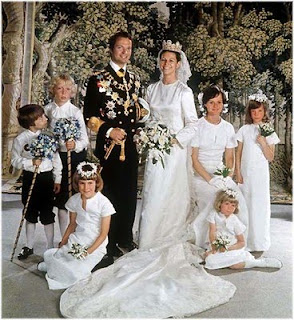 On the same day as her parents married, on the 19th of June, Swedish Crown Princess Victoria is due to marry her former personal trainer, Daniel.

Now I’m not Swedish – even if I’m led to believe there’s some blue and yellow blood in me  – but I’m still quite interested in the forthcoming Swedish Royal Wedding. This is quite unlike me, so hear me out.

I’m also not alone in getting caught up in all the Royal excitement. Even the UK media is taking notice. Amongst the lousy news of ministerial resignations, pointless killings,  public service cuts and government deficits, who can resist a Royal Wedding? Last weekend there was a story about the Swedish young Royals in one of the Sunday papers and in this week’s Grazia there’s an article about the upcoming nuptials.

Normally I am pretty ignorant, and/or not interested in any Royals (particularly not the British ones), but the thing is, I remember so well the wedding of Victoria’s farther, King Carl Gustav and Queen Silvia in 1976.

I was then a teenager and had just moved back to Finland from three years in Stockholm where the courtship between Silvia and the bachelor Prince was always in the papers. I watched the wedding live on TV; I think most of Sweden as well as Finland did. The story of how the future Queen met her Prince was such a fairytale. Silvia, who was born in Germany, was a Olympic hostess at the Munich Summer Games in 1972, where she met the then Crown Prince. (So both father and daughter fell for sporty types.) She was beautiful, dark-haired and though well-bred ( I think she has some royal blood in her – these things seemed very important in those days), she was a foreigner. The thought of the King of Sweden marrying a foreigner seemed so novel, even if we knew the European royals often married other royals from abroad. And somehow Silvia to us, or to me at least, seemed ‘normal’. She was simply a foreign commoner who by some incredible good fortune happened to bump into a Prince and fall in love…Aaah.

And the Crown Prince had been quite a bachelor, with pictures and stories of his various girlfriends being branded about daily in the newspapers and the gossip papers. For it to be a German ordinary girl to tame her seemed a dream come true.

I also remember when the first born Royal was a girl, Victoria, and the debate started about whether she should be allowed to be Queen. Then in 1979 Sweden unanimously changed its constitution to allow the Princess to ascend to the throne, even though she had a younger brother. This alone convinced me what a progressive and thoroughly fair country Sweden was, and since I had as yet not met my Englishman I vowed to move back to Sweden as soon as I finished my studies in Helsinki. Well, you know what happened there if you’ve been reading my How I came to be in England -tale. 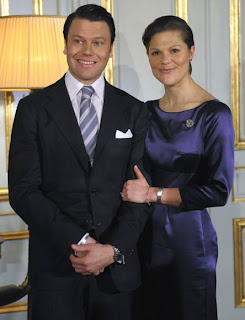 So here they are, the happy couple. I will abstain from making any rude comments about Daniel; he’s had quite a bad press in Sweden because of his ancestry. Or lack of. But in these modern times, who the hell cares who marries a Royal anyway? At least the Princess will keep herself fit now she has a truly full-time personal trainer on hand. (That was not meant to be rude…)

Putting away my Royalist cap now and readjusting my radical Republican one….