Do you sometimes feel that you want to wear the same clothes all the time? Especially when the nights draw in and it gets cold outside, I become a hermit, not just in mind, but also in what I wear. And when I find something that I’m comfortable in, like this poncho below, I find myself putting it on day after day. 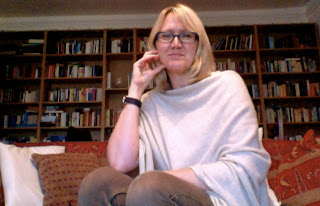 I love this simple garment mainly because it’s made of the softest cashmere, but also because it’s so versatile. I can wear it several ways, even as a scarf, which makes it handy for wearing under winter coats.

Which brings me to my second current obsession – my new Barbour.

All I can say, as once again I decide on the poncho and Barbour combo for tonight’s meeting of West End Lane Crooks (I’m not such a hermit after all…), I’m glad I’m not the only busy woman who finds herself wearing the same old, same old, day after day. Some of us even make a fashion statement out of it….

(I can’t wait for the second series of this Danish cult TV crime series. It starts here in the UK later this month. Bring it on, sexy jumper wearing Sofie Gråbol! )

What are your characters wearing?