I know Christmas is over and due to the VAT hike and recession and all, everyone’s on a tight budget (me included), but I have to share something with you.

Especially if you live with a football fanatic – or two – or three – like I do.

You know how usually football scarves are made out of nasty acrylic and feel everything but comfortable and warm?

Well, there’s a company called Savile Rogue, which sells ones made out of cashmere. (You have no idea how revolutionary this is) They come in all the major league colours and look very much like the real thing. So much so, that they are even good enough for the Englishman and allowed to adorn his, the most sensitive of necks. 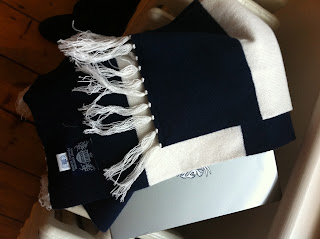 Since the Englishman’s also quite sensitive about not looking like a football thug, he loves the smart air (a la Roberto Mancini below) which wearing this scarf gives him, while at the same time being able to show his support for his beloved Tottenham Hotspur.