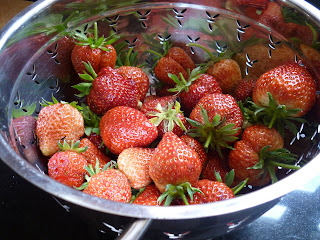 As the weeks march on, I try hard not to think negatively about how our lives are going to change. I keep telling myself that this is what I want, to live in a city, to be close to everything, not to have to get into my car every time I need as much as a pint of milk. I crave the presence of other people, of culture, of going to the cinema on the spur of the moment, without having to plan things hours before, or to just sit by the window and see some kind of human life pass by, not just cows munching on grass or dogs running around chasing their tails.

I do not want to be beholden to this house with its quirky little problems, its garden which needs our full time attention, especially now at the height of summer, the seemingly constant need for upkeep, whether it’s renewing the gutters, or trimming the hedges. Not being able to leave the house for one weekend in the fear that all the painstakingly cared for plants will die if they’re not watered.

And yet, there are so many things I will miss. The crop of various lettuce leaves, straight from the ground to our plates; the fresh dill which this year seeded itself and has been the best ever; home-grown new potatoes and onions; fresh herbs pretty much all year around. And then later on the year the apples, pears, Victoria plums, greengages and crab apples (which make the most delicious jelly) from the orchard. Only having to step outside the house to find the most fantastic undisturbed walk over the fields; being able to play music as loud as you like, not ever having to consider the neighbours (what neighbours?). I will miss the space, the quiet, the privacy; the stars on a clear night; the moon as it was last night illuminating the garden as if someone had left the lights on inside.

Instead I curse the cows when they delay me in the lane, then again on the road outside and a third time when passing through the nearest village. ( I once got caught by 4 sets of cows going for milking when driving to work in the morning). I complain when husband is away and I have to do the watering on my own, dragging out the hose, rolled over two old, badly designed and non-functioning reels, only to have to recoil them back again afterwards. I look at the weeds pushing up around the roses as fast as you can pull them out and think, ‘That’s not going to be my problem for much longer.’

I book theatre tickets for the autumn in London; I arrange a book club; I organise to give up my car; I study maps and bus routes to see how I’m going to get myself around in the city; I plan which galleries and museums I’m going to become a friend of. I remind myself that this – living in London – has been my dream ever since I moved to England, and that the life here in the country was never one that I chose or had planned to have.

Sometimes, though, what you most desire and wish for can be the most frightening thing ever.

I leave you with some images from the garden as it was a few moments ago.

The pond where lilies fight for survival with the weeds.

One of my favourite roses which I can see from the kitchen window while washing up.

The cabbages – largely ignored but yet doing well!

The lavender hedge we planted along the path to the sauna cottage is just about to come into full bloom.

Strawberries under netting – the birds love them too.

My pride & joy – the purple honeysuckle.

Another rose, this time by the (unused) lawn tennis court. Again much ignored but still flowering.

Abandoned roller – we used this a lot during the first summer in the house when we actually played some tennis.

Bridge over the pond; I can still see small son and daughter hanging from the rails while I tried to stop them falling in.