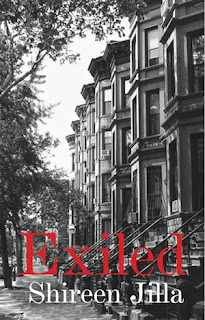 The cover of Shireen Jilla’s debut novel, Exiled, was what first attracted me to the book. The black and white view of a typical New York brownstones spoke to me in its simplicity, yet the red lettering implied of something sinister.

Last night when I met Shireen Jilla (dressed in smart New York style in a black sleeveless shirt-dress and high heeled nude shoes) at West End Lane Books she told me she had to fight hard to keep the understated design. Here’s a debut novelist who knows her market and has guts, I thought.

Exiled is Jilla’s third complete novel, and like so many new authors, she too had to wait, and wait, and yet wait some more, before she got her first book published. ‘Patience is the most important quality a novelist can have,’ she says.

Exiled is a tightly knit, fast paced book that you just cannot put down. (I speak from experience) It tells the story of Anna, who together with her American diplomat husband, Jessie, and their 4-year-old son move to New York. But her ‘romantic dream turns into a dark battle’ when disaster after disaster falls upon her. The reason for her unhappiness isn’t just the cultural difference between London and New York (where 4-year-olds can be ‘under-scheduled’ and a case of head lice is ‘an infestation on the community’). It’s also the overpowering presence of Anna’s immaculate Upper East Side mother-in-law, ‘the thinnest person I had seen who didn’t have cancer’. As the plot thickens Nancy comes to play a ‘crucial and destructive part’ in Anna’s demise.

Due to her journalistic background (she works for The Standard and The Times), Shireen Jilla places great importance on the editing process. ‘I have no qualms about cutting out whole passages.’ In fact the first draft of Exiled included another whole plot stream where the protagonist, Anna, back in England, reflects back to her New York life. ‘All the action was in New York,’ Jilla reflects. Removing those paragraphs caused a re-write, which in turn made the novel such a quick and enticing read.

Shiren Jilla is also going to be appearing at The Telegraph Hay Festival on Tuesday 31st May 2011.