Yesterday I had a small operation under local anaesthetic which means that I have to rest for a few days, not operate heavy machinery, or sign legal documents (!) for 24 hours. (So I’ve resisted the urge to drive a digger.) I’m also not allowed to do any heavy lifting, or exercise for four to six weeks. I’m on painkillers which make me feel tired and woozy.

After the op I was so relieved that it went well that against all good sense, I decided to keep a previously arranged date to meet up with some great friends. We’d planned to go to our ‘regular’, the Duke of Hamilton in Hampstead. This has become our favourite pub; it serves good beer, the wine list is OK and they have tables outside both in the front and at the back. It’s proper boozer rather than a restaurant, something which is very rare in Northwest London. (And they’re on Twitter).

We hadn’t seen our friends for weeks, and they were going to be in town for just a few days. When I asked Mr Consultant he said it would be OK, as long as I didn’t do too much walking. A brilliant excuse for once to take a cab the short distance! (I immediately considered wearing high heels to the pub). My friend said, ‘You won’t have to do any lifting either, I’ll hold the glass up and you sip.’ So, you see, I couldn’t refuse. 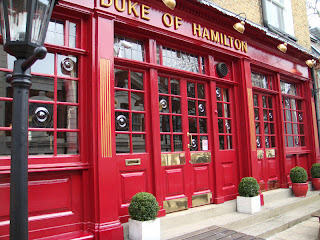 In the event I don’t think I made very good company; I started to droop after the first bottle of beer. For once I was the one who wanted to leave first…and resisted the call of The Holly Bush, another favourite pub on our way home when we walk. Instead we hailed a cab and I had an early night. But I’m glad we went – it was great to see everybody.

In the same spirit of ‘rallying around’, today the Englishman and Daughter cooked a picnic lunch of onion pie, honey and mustard chicken and salad, which we shared with Son and Girlfriend in the garden. A lovely family lunch for which I didn’t have to lift a finger.

Now I’m lounging in front of the TV watching Athletics (of all things) while the Englishman is tidying up in the kitchen.

I could get used to this….