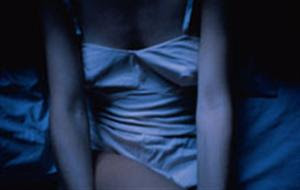 My marathon week of theatre-going started tonight with a one-woman play at Hampstead Theatre. This play, starring Sandy McDade and written by Lucy Kirkwood and Ed Hime,  has been selling out since it opened on12th January with a ‘World Premiere’. The run was extended by two weeks to allow more people to see it.

All I knew about this play was that the audience would sit around the living room where the action takes place. What I didn’t know was that we had to leave everything that we couldn’t keep on our laps in the cloakroom (not a problem) and take our shoes off in a downstairs ante-room (a problem if your socks aren’t immaculate which mine obviously were…hmm…), or that the audience was so very small in number – there must’ve only been twenty of us in total sitting around a basement flat living room.

To me the play was uncomfortable both physically (we were sitting on a hard veneer sideboard) and mentally. The subject matter of a young woman trying to cope on her own while her partner is away is so close to my heart that I very nearly left the set. But I remembered the little talk we’d been given just before we were told to remove our shoes about the play being an installation piece, where the audience is present but mustn’t partake and most pointedly mustn’t leave the set unless absolutely necessary. They even told us that there was a guard member of staff posted outside the door in case we tried to escape leave mid-performance.

Seriously, though, the play and particularly the performance of Lucy Kirkwood as a woman on the very brink of mental and physical breakdown is explosive. But watching her private hell at such close quarters seems wrong somehow. Several times during the hour-long play I found myself turning my face away from her, and I noticed others around the room do the same. So it begs the question, do we go to the theatre – or to any art exhibition or performance – to enjoy ourselves, or do we go to watch suffering? There must be a middle way. Let’s hope my next two theatre pieces this week have a little more joy and happiness in them…