Just back from a week in Finnish Lapland and boy was there a lot of snow. I forget how much I miss the stuff. As I huffed and puffed on the first cross country skiing trip in about 20 years, I wondered what it is about the stuff that makes me smile. Of course whizzing on snow down a mountain pretending to be cool in your hired helmet and skis, hiding the terror of the steep decent behind the latest in designer goggles that the teenage boy in Snow & Rock claimed would be ‘great in flat light’ (I didn’t dare to ask what that was), is one thing. Although the old knees and thighs start to ache after a while, there’s always a handy bar or mountain top cafe to hide out in or increase courage with a glass of something fortifying. As we were in Finland there was a lot of alcohol involved…

I, however, was more ambitious than that. The purest, deepest snow in Lapland demanded a more noble effort and cross country skiing seemed to fit the bill. But I had forgotten what a lot of effort it is. At primary school in Tampere I’d been quite good at the sport, so much so, that I won many prizes. (A missed career opportunity one thinks?) Now after many years spent going down a mountain I’d forgotten that there are no lifts on the cross country trails. Nor is it easy to go down a hill following a narrow trail. But I had sisu, (Finnish for endurance), and so bringing my poor old body to its limits, I made the first five kilometres without any major embarrassing falls or fits. My partner, the master of all sports, fell over a lot – but that’s another story. I will only say that I enjoyed the cross country skiing so much I took him out the next day too, doubling the distance.

The cross country trails in Yllas, where we were, run through beautiful scenery. On the second day when we were both a little more used to the limitations of our narrow skis and light boots, and weary bodies, we spent more time admiring our surroundings, enjoying the many huts serving cinnamon buns and hot drinks, as well as the friendly fellow crazy people, many of whom were central Europeans and even Englishmen.

But the snow was the star of the week. It hung heavy on the dark branches of the fur trees, even forming high narrow piles on top of bare, seemingly thin willowy branches of the birch trees. The forest floor either side of the cross country track was untouched by human step. All you could see on the white snow where occasional faint marks made by birds or hare. Twilight, or the blue hour, seemed to last forever. The landscape became magical , then slowly the sky fell dark and the snow glittered as if covered by tiny diamonds.

‘I guess at the end of the winter you must grow tired of the snow’ I said to my lucky friend who half lives in Lapland. It was our last day and I was trying to look forward to our return to gray England.

I’d forgotten Finns never lie. To them there’s never a good reason to. 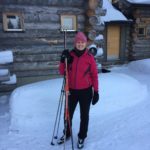