As those of you who’ve been reading my posts lately know, I’ve been recovering from an op and feeling a little down. Plus I’ve had no energy whatsoever.

Someone clever (Son’s Girlfriend) suggested  that I may be a little anaemic. Stupidly this hadn’t even occurred to me. It’s almost as if I’d not spent much of my teenage years being anaemic. Then later, both times when I was pregnant, I spent long spells on iron supplements. Doh!

Then I remembered the side effect of taking iron. (I’ll whisper it: constipation). Just what I needed when I already had more fat and ugly days than thin and beautiful ones. But to my rescue came The Englishman (bless him). He found this product when  shopping at Waitrose. 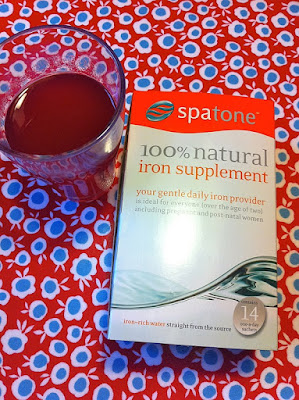 When I opened the first Spatone packet I must admit I thought, ‘We’ve been had.’ The contents looked just like London tap water. But when I tasted it, I could tell there was iron in the product. A lot of it. To drown the tangy taste I followed the recommendation on the packet and mixed the water with juice.

And ladies, the reason for this post: the product has made a real difference to me. After a week taking the iron supplement in this form, I feel so much more energetic. I don’t constantly crave rare steak or liver. And, more crucially, it’s had no adverse effect on my body.

Spatone costs £7.49 for 28 sachets. For those living in the UK, Spatone is included in the 3 for 2 vitamin supplement offer at Boots.