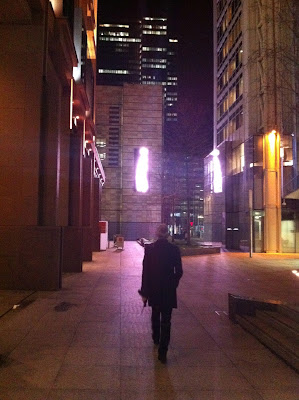 The New Diorama Theatre is a small 80 seat venue in central London, a mere hop and skip away from Great Portland Street and Regent’s Park tube stations. It’s a busy area on a weekday, but on a Saturday evening this side of Euston Road was deserted. The offices and a few cafes catering for the nine to five working folk were eerily empty.

Luckily there was the Queens Head and Artichoke nearby where we had a quick tapas and a glass of Rioja before the play started.

When we arrived at the Diorama we were told the play would start, ‘Approximately seven thirty’ and that we would be called in when the cast were ready. I love this kind of relaxed atmosphere in an independent theatre (I never realised how many there are in London).

So off we went to find a drink in the brightly lit bar, which after the darkened pub and quiet streets outside made me worry about the state of my make-up. Trying to be less self-conscious I read the programme and prepared myself to see another experimental piece of theatre. I saw Strindberg’s Apartment was produced by The Faction Theatre Company, which is dedicated to innovative revivals of classical texts. The programme likened the play to Twin Peaks (the early nineties semi-supernatural TV series by David Lynch). I knew then we were in for an interesting evening.
†
But this experimental piece of theatre wasn’t all bad; the premise of using Strindberg’s works (The Storm, After the Fire, The Ghost Sonata, the Pelican and The Black Glove) as the plot for a play set in his own apartment block on the posh Drottninggatan in Stockholm is an excellent one, and I was fully sold on the play at the end of the first act.

The scene was set in the middle of a small room, where chalk marks divided the apartments. Looking like an architectural drawing, this helped the audience – seated all around the room – to understand these were separate flats we were peeping into and it also seemed to help the actors to keep inside the invisible walls of their particular apartment. (At this point I was relieved to see that the seats were real theatre ones, not part of the furniture, and that we were allowed keep our shoes on unlike at the set of Small Hours at The Hampstead Theatre)

At first when the characters, by walking around in a circle, ascended or descended the staircase, again depicted by a chalk-drawn square block in the middle of the stage, I had to stop myself from shouting, ‘You’re pretending, aren’t you?’. Slowly I got more used to this and drawn into the various mini-dramas played out in front of me. The many actors had a varying degree of talent, but I was mostly drawn to the performance of Janine Ingrid Ulfane as the recently widowed, embittered Fru Vesterlund. Her contained suffering was well portrayed. It’s no mean feat to pretend to jump to your death on a flat stage, from the top of a coffin lying at the feet of a couple of members of the audience (us!).

But when a fire devastates the house, sadly the plot falls to pieces too. First there were the recriminations – who started the fire? Then there’s the appearance of the younger son of the owner of the apartment block, who returning from America has a grudge to bear and confronts his elder brother. ‘Don’t you remember?’  he says ominously. This scene, although seemingly nothing to do with the rest of the play is actually quite engaging.

But the question of who started the fire is never satisfactorily answered. We’re plunged instead into a scene where a young student from the attic finally declares his love to the girl from the posh family in the upper, better apartments. The problem is she’s now a ghost, amongst about half of the other residents of the apartment block. The whole play ends with a obscure monologue by the same student where he comes close to uttering the immortal song lyrics, ‘The children are our future.’

It is a shame that this 2.5 hour play wasn’t cut down to – say – two hours. There were several scenes which we could have done without, in particular the last monologue which just had me squirming in my seat, eager to leave the theatre.

I love Strindberg’s work and here were several recognisable characters and scenes well turned into a new play. But on the whole this piece by Simon Reade lacked structure – it was as if the playwright wanted to omit as little as possible from the five Strindberg plays, while still adding his own mark on the piece.

Still, I’m glad I saw the play. It spurred me onto to work more on an idea involving Strindberg’s life that I’ve had on the back burner for a while. Since I’m going to be in Stockholm later this month, I may do some more research. At least I shall visit the ‘Blue Tower’ as the master himself described his apartment. It now houses a museum with regular talks, exhibitions and even a Strindberg shop. I cannot wait.

Will my Strindberg obsession produce a novel?