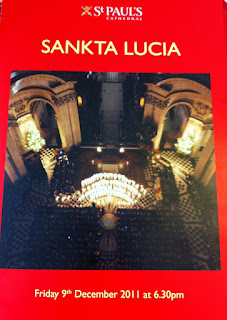 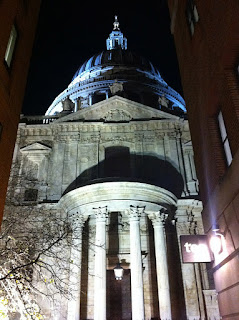 I felt very privileged to be invited to The Swedish Church Sankta Lucia carol service, which this year was held at no lesser a venue but St Paul’s Cathedral in London. The service was due to start at 6.30pm, but we were advised by our seasoned London friends to arrive early to get a good seats. So on the dot at five pm, we joined a queue (which to our surprise was already forming!) and shivering in the chill December wind, waited for more than an hour on the steps of the cathedral. By the time the doors were finally opened, the queue behind us snaked well out of sight around the corner.

The service itself was a combination of English carols and Swedish traditions. There was an excellent speech by the Swedish Ambassador, who true to form is a young woman with long blonde hair (these Swedes!).  She talked about the importance of traditions, and made the audience laugh when she revealed one of the more curious Swedish Christmas Eve customs: for the past fifty years the Swedish TV has broadcast a set of Disney cartoons at the same time in the afternoon. Over 4 million people – half of the Swedish population – tune in each year.

But, for me, the best part of the service came when the lights were lowered and a procession of The Ulrika Eleonora Church Choir and the Bromma Vocalis, all glad in white robes, holding a candle each, and led by Lucia herself with a crown of live candles in her hair, made their way down the aisles of the cathedral. The slowly advancing tunes of Sankta Lucia hymn filled my ears and senses and swiftly took me back to my school days in Stockholm’s Johannes skola. I was thirteen again and singing (badly) with the other children.

The hymns the choir sang were all familiar- although long forgotten – to me. The singing was absolutely beautiful and when the last hymn, Silent Night was sang in Swedish I have to admit to having a need for a hankie or two. And when the choir filed past us back down the isle, I felt like clapping, but obviously that just was not appropriate.

Instead we made our way out of the magnificent cathedral and went across the road for a well deserved burger.

It’s funny how feeding the soul makes you incredibly hungry for big eats.