During my holiday I made a quick visit to my hometown, Tampere, with the Englishman, Daughter and Sister, to mark a significant birthday. The weather was absolutely stunning – hot and sunny – making this old industrial town appear frivolous and fun.

We stayed in a hotel as there were so many of us. I chose a place close to the centre, the Sokos Ilves Hotel which was also recommended in the Conde Nast article I wrote about here. It’s a multistory building, ugly to look at, but the views across Kehräsaari and the two new bridges across Pyhäjärvi from the (pleasant enough) rooms were stunning.

I’ve written before about the incredible light in Finland in June. Because I’m so used to living in the UK where even in the summer it gets dark at a reasonable hour, on holiday I found it really difficult to sleep past the three am sunrise. Equally in the evenings it seemed strange to go to bed when it was still light.

In Tampere we decided to live according to the sun, and sleep as little as possible, so off we went in the evening to find a watering hole. Surprise, surprise, there were quite a few like-minded people out on the town…(OK, two….)

This is how light it was twenty past eleven at night. It’s no wonder us the Finns drink so much; in the summer it’s too light not to celebrate with a glass or two and in the winter it’s too depressing not to have a drink…ok that’s one of the most contrived excuses I’ve made up for our behaviour ever.

Next morning was another stunning day, and as we headed out of the hotel I couldn’t resist taking the classic shot of Tampere: of the rapids which used to power the two large factories in town, Tampella and Finlayson. 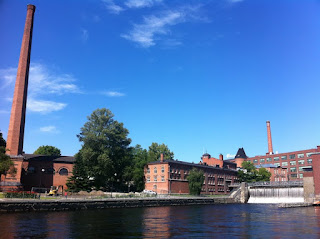 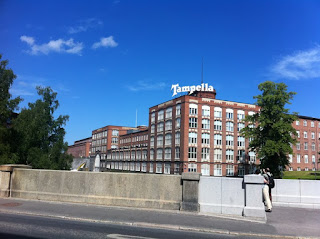 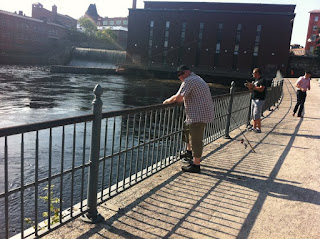 We walked along the water, past the men fishing (in the centre of a Tampere!) to the Cathedral where I, more than 25 years ago now, married the Englishman. That day was a similarly hot and sunny one. 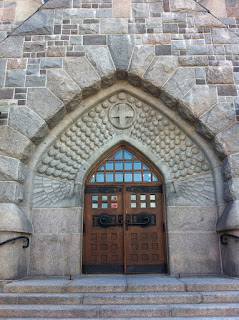 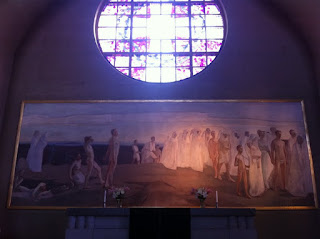 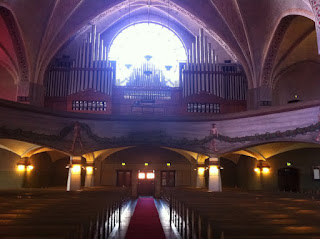 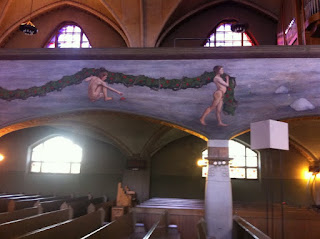 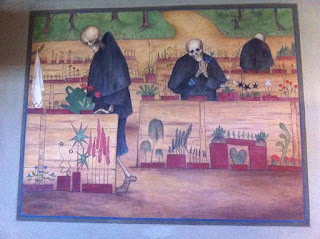 This church means so much to me I have to go and visit it every time I’m in Tampere. It has wonderful frescos painted by Hugo Simberg, a pupil of Akseli Gallen-Kallela.
‘Interesting medium,’ said the Daughter and peered at one of the pictures depicting skulls and dead gardens. I thought how fleeting life is when one’s youngest can say such grown-up things. (The other day she started a sentence ‘I remember when I was a teenager…’ What the????)
When I was a child we’d come to Tampere Cathedral every Christmas Eve. Sitting on the balcony next to my sister, full of anticipation of the imminent visit of Father Christmas, I’d look at the haunting images and wonder what kind of awful lives these children must have had. I wrote a short story about one of the images, the Wounded Angel, during my MA in Creative Writing a few years ago. Unfortunately during various moves and changes in computers, I’ve lost it. The image still haunts me, though, as does this city.

On location in Tampere, Finland