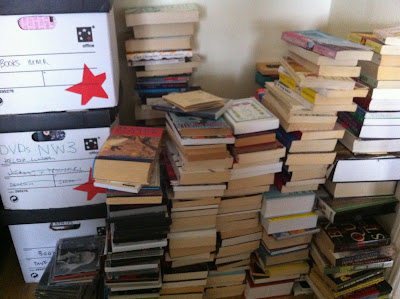 We’ve lived in the new flat in North London for nearly two months, one of which I spent galavanting around the Nordic countries, so for me the new life following our Big Move has only lasted a few weeks.

Weekend before last Husband remarked that we really ought to stop treating our new life as a holiday. We were sitting at our local pub, The Holly Bush, for the 3rd time that first week after my return from Finland. Earlier in the evening we’d again decided not to bother with any of the cooking business and had instead booked tickets to see a film at the Everyman, and afterwards drifted towards the pub on top of Hampstead.

‘It is a Sunday,’ I said and smiled. But I knew what he meant; for one thing our finances could not sustain eating out or ordering a take-away every night. Besides, surely there would become a time when I’d get tired of food cooked by others? (Hmm.)

Needs must, of course. One has to go to work at some point. Daughter needs to be organised for university. Son is spending couple of nights a week with us to give him a break from a gruelling two-hour commute.

So from the following Monday a certain normality descended on our family life. How quickly that happened surprised even me. In a few days I was stressed, Husband was stressed. There was no time to sort out the flat, money, food. One week night when everyone had arrived home late and no-one had thought about food, we were all at each others throats until the curry take-away arrived and blood sugar levels were back to normal.

On the morning after my second working day, our shower leaked into the flat below. I spent the day with a builder and a plumber. The following day my pc refused to recognise either of our two wireless networks. It’s still being difficult, only occasionally connecting to the internet, mostly refusing to operate. (It’s definitely male). I’m saved by my little laptop. With its odd quirks, like suddenly deciding to fling the cursor anywhere on the screen and type on the wrong paragraph, or its temperamental space bar, at least for now it’s allowing me to use the internet and blog.

Something we’ve talked about for a while is to go over to Apple. First sensible step seemed to be to change to an iPhone. But the transition from an old Blackberry Pearl seems ridiculously difficult. I keep deleting emails, unwittingly Tweeting (yes I know I’m not alone), and my mailbox is constantly ‘unavailable’. My network operator refuses to touch the iPhone, telling me to ‘pop over to an Apple Store’.  When did you last ‘pop’ over to Brent Park or Regent Street? We’re waiting for a phone call from Apple Business to advice us on our possible transition from Microsoft. I haven’t had time to chase them.

My to do list is growing faster than I can cross things of it: find a new GP, vet, dentist, optician, dry cleaner, butcher, tinker, tailor, candle-maker (you get the idea). I have an endless list of places and people I need to tell about the change of address.

I can’t use the new gas cooker in the flat. I feel very Finnish about this – in my childhood I was told gas is dangerous. The washing machine and and tumble drier seem to have a life of their own: noise and steam engulf the flat when I turn them on. The kitchen is minuscule compared to our old one, which I admit was ridiculously proportioned. But it means that we now don’t have enough room to store all our dry foodstuffs. When I do have time to cook, I can never find a spice I need.

My beloved books are still stacked on heaps all over the floors in the flat. We can’t agree on how to arrange the lounge to accommodate them. Perhaps we should put them all in the study? And have no room for desks…?

We have no curtains, just blinds. All our paintings, prints and mirrors are stacked against the wall in the lounge and bedrooms. We need to call the builder to put them up but until we have finally decided how to organise the space we can’t do this. Besides, there doesn’t ever seem to be a day when we are both here for this to happen anyway.

We have no wardrobes in our bedroom. These were supposed to be purchased and put up before we moved, but somehow in the chaos that was the Big Move, this seemed unimportant and was placed in the ‘to do later when we’re more settled’ category.

There are several lovely London friends I haven’t even had time to see yet, let alone answer their lovely emails. (Sorry) My social diary is deliciously full and I love being busy, but…

I feel my life is far from the calm that I felt settled over me when we finally moved out of the sticks and into this lovely flat. At least I have an office, which if you ignore the unopened boxes and books on the floor, allows me to sit down and write a blog rant.

My life reminds me of the chaos theory Son told me about a few years ago. It’s used in Mathematics and describes a system where a state of disorder always prevails and can even be predicted. Like the weather. I’m sure our family is just such a mechanism. We may have periods of lucidity, ‘clear moments’, but in the end the whole of our existence returns to its normal state, that of Chaos.

Or perhaps I just have post-move-stress disorder?