From the outside this pub looks far too large to be any good, and it took some emotional blackmail type of comment from the Englishman to even get me through the door, ‘But we said, we’d to try all the pubs!’

The thing was that as soon as I’d written the first post about The Maynard Arms, promising you all a thorough review of all the pubs in N8, I’d regretted the whole thing. With the emotional displacement the move caused me (as usual), and having – with an immense stroke of luck – found such a great drinking and eating establishment as the Maynard right on our doorstep, I just didn’t want to risk trying out some dive or other, with a smelly carpet, that served badly kept beer. But, this reluctance to try out new places just isn’t in the spirit of the Knowledge game at all. 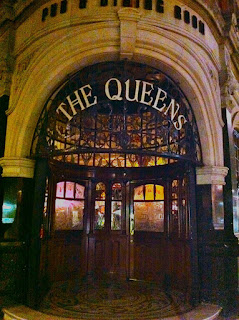 Needs must, and promises kept, so yesterday we decided that The Queens on Broadway Parade, N8, had to be the next pub on our Knowledge tour. It’s only a little further from the Maynard, about five minutes’ walk away from our new abode.

And what a little (large) gem this place turned out to be! The Queens has two largish bars and a dining room as well as a garden. According to their website the pub was originally built as a hotel, which explains the grand entrance, the high ceilings, the chandeliers and the large dining room. As we walked in, about half past six on a Thursday night, both the bars were semi-full, although the dining room looked empty. 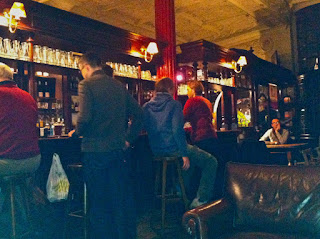 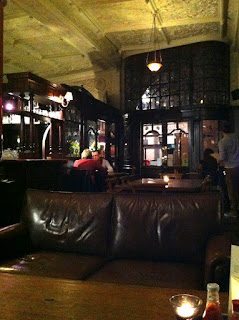 We had a pint each of a bitter called, Pure. (This Knowledge lark is going to give me a beer belly the way I’ve suddenly started drinking pints again). We sat down on a cozily worn-out, high-backed leather sofa to enjoy the jovial, and not at all stuffy, atmosphere of the place – as well as the beer.

There were jars with paper napkins and cutlery on the tables and I grabbed one of the menus. It looked fairly standard gastropub fair, with Carrot and Coriander Soup, Aberdeen Angus Burgers and Roast Butternut Squash Risotto, to name but a few dishes. I wouldn’t mind eating there one evening, but last night we both fancied noodles and left The Queens with a promise to ourselves to definitely be back.

The noodle hunger was satisfied by a nearby Vietnamese restaurant, Khoai, which was another new experience, but more about that later.

So, Pub No Two of Crouch End Knowledge is done!

The Knowledge Crouch End – Part One: The Maynard Arms