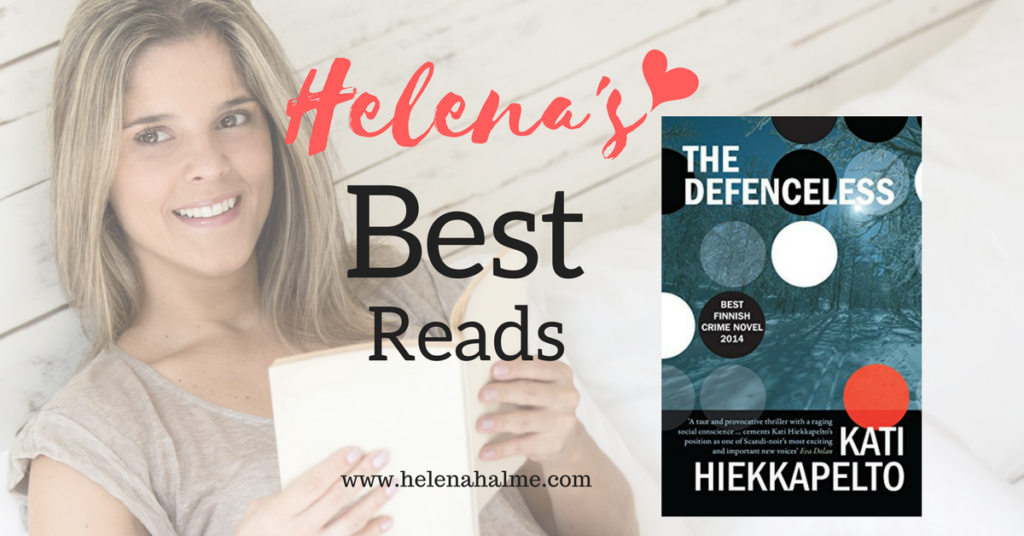 The Defenceless by Kati Hiekkapelto, published in the UK by Orenda Books, is a Nordic Noir tale of immigration, drugs and unexplained deaths set in a coastal city in Finland.

Anna Fekete, a young police detective hailing from Eastern Europe, is called to a case of a fatal car accident, seemingly caused by a Hungarian au pair. At the same time, a young illegal immigrant from Pakistan, Sammy, is running from the police, fearful that he’ll be sent back to a certain death. His only refuge is drugs, but his addiction gets him involved in the city’s murky underbelly and violent gangs.

When two elderly residents go missing from the same block of flats where Sammy’s small-time dealer is found dead, the young Pakistani boy is arrested, suspected of involvement with the drug dealer’s demise and a connection to the gangs.

The second detective in charge of the investigation, Esko, believes the removal of all immigrants from Finland will solve the city’s increasing problem with international gangs, which bring in new types of illegal activities and violence.  Anna, however, has an opposing point of view. She herself is an immigrant to Finland. Anna and her alcoholic brother came over from the former Yoguslavia a few years earlier and because of her displacement, she feels a strong affinity with the helpless Sammy, as well as with the young Hungarian woman involved in the disappearance of one of the elderly residents.

Kati Hiekkapelto’s storyline and characters in The Defenceless are believable and the story is interesting and completely addictive. What’s more, the ending is wholly satisfactory, without being obvious or too neatly crafted. I only got a slight whiff of who might be behind the killings right towards the end of the book. I’m now totally addicted to reading more Anna Fekete books.

As a former translator, I also recognize the brilliance of the transcript by David Hackston. Turning foreign language fiction into English is no mean feat. There aren’t enough Finnish books being translated (partly due to a lack of translators), a situation which The Finnish Literature Exchange (FILI) works tirelessly to correct. Each year FILI awards approximately 600,000 Euros in translation and printing grants to more than 300 different projects. They also run courses and seminars for translators. To find out more, click here.

There Are Four Kati Hiekkapelto Novels

But back to Kati Hiekapelto’s novel.  I’d recommend The Defenceless to anyone who likes character-led Nordic Noir crime novels without eye-watering violence. There’s plenty of intrigue and tension, but no torture scenes of people being tied to chairs placed over plastic sheeting in remote locations. Luckily, there are two further Anna Fekete books to enjoy in English. The Hummingbird and The Exiled are both out now. I also hope that Hiekkapelto’s latest novel with the determined female detective, Hiillos (Embers), which will be out in Finnish in September 2018, is going to have its English language version soon too.