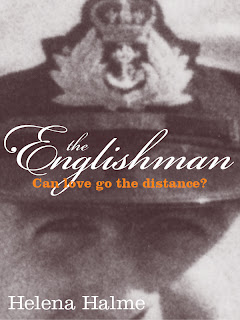 Yes, it’s true, my novel, The Englishman is finally out in the world all on its own. Late last night, I pressed the scary, ‘Publish’ button on both Amazon and Smashwords sites. As I sat and watched the screen change from ‘Pending’ to ‘Publishing’ to ‘Success’, I suddenly felt my heart in my mouth.

What had I done?!
I quickly downloaded a copy of The Englishman onto my own Kindle and on the Englishman’s iPad and confirmed that it all looked to be in order. The cover designed by the wonderful Simon Wilder, looked absolutely brilliant, the text was correct and flowing, thanks to my efficient and stoic editor, Dorothy Stannard, and even the title page appeared as it should. Phew, and phew again.
I’ve promised to do a series of posts on how the whole process of publishing The Englishman here in the weeks to come, but before I go there, I’d like to extend a huge thanks to you. Yes, you, my wonderful blog readers.
You may know that The Englishman started life some two years ago as a series of blog posts, called How I Came to be in England. Before I started writing the story here on my blog, I’d attempted a few manuscripts on the subject, but always abandoned them after the first 30,000 or so words. But here, on my blog, I had so many supportive comments, emails and tweets, that I just had to continue writing it even if sometimes the words were anything but flowing. The story just forced itself out of me – and as corny as that sounds, I stand by this. Sometimes during that process, which lasted about six months, it felt as if it was you who wrote the story, and that it had nothing whatsoever to do with me.
The hard work for me only began after I finished the blog posts. In order to make the tale into a proper book I needed to edit, re-write, edit and re-edit. I’ve lost count of how many versions there have been, all I know is that the book version is about twice as long and there are many more characters.
You’ll be glad to hear that the main story line hasn’t, however, changed. It’s still a love story about a Finnish girl meeting and falling head over heels in love with an English naval officer. The painful twists and turns in the story are still there, as is the difficult and heartfelt relationship with Kaisa and her father.
I hope you, who’ve seen this manuscript in its raw first draft, will enjoy the finished, grown-up novel. I myself am pretty proud of my baby…
The Englishman is available to download on Amazon and Smashwords now.