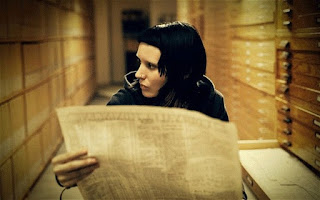 I was very sceptical about watching a Hollywood version of the first book in the wonderful Millennium trilogy by Stieg Larsson.  Although I felt the Swedish films left a lot to be desired, mainly because the plot of the books was completely mixed up between the three films, they had some authenticity as films made in the country where the crime novels originated from. Watching the whole action in English would surely take a huge amount away from the Swedish atmosphere?

I also absolutely loved Noomi Rapace as Lisbeth Salander in the three films by Oplev. She seemed to capture Lisbeth’s complicated character – and she spoke Swedish. (As aside, I’ve yet to forgive the actress for leaving her lovely husband, Ola, just because she’s become the more successful actress – or at least this is what the gossip magazines in Sweden cite as the reason for the couple’s marriage breakdown and I believe them…).

But as the opening credits rolled on The Girl With The Dragon Tattoo, I got a feeling that this version by David Finch could be quite good.

And I was right. The relatively unknown actress who portrayed Salander, Rooney Mara, was absolutely brilliant. She completely nailed Lisbeth as the distrustful, vulnerable, yet talented and confident modern sleuth with some serious issues with the ‘perfect’ Swedish society she inhabits. Lisbeth’s apparent lack of social graces became both tragic and funny in Mara’s skilled acting hands. There is a moment when watching Blomqvist work his laptop, she shuts her eyes in frustration at his slow speed at the keys. It was both funny and sad.

Just as when reading Larsson’s first book, during this first film we all completely fell in love with Lisbeth. We felt sorry for her, we admired her, we worried for her.

The rest of the cast – apart from a couple of dodgy, faintly German-sounding, accents – weren’t bad either. Daniel Craig is on top of his game; he totally sold his version of Blomkvist to me. My only beef with the accents was a minor one. Although I wondered why the director felt the need to have any accents at all – neither Craig as Blomkvist or Mara as Salander have Swedish accents. Perhaps the Swedish cast, led by Stellan Skarsgård as Martin Vanger, couldn’t do the mid-Atlantic English? I highly doubt it.

In any case, the story’s authenticity did not suffer from this lapse in accent discipline, especially as the film was obviously shot in Sweden. In the final scene we even get to Blomkvist’s Stockholm stomping ground in Söder, something I was gladdened by.

I now cannot wait for film two in the trilogy. Larsson’s second book, The Girl Who Played With Fire is my favourite, mainly I think because it’s set in Stockholm, near Blomkvist flat on Bellmansgatan. There is nothing like reading a book, or watching a great adaptation of a favourite book which is set in a city where you grew up. And I hope the disappointing viewing figures in the USA aren’t going to stop the sequels. Now that really would be a tragedy. 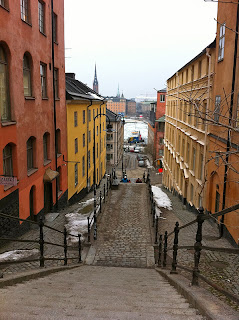 So if you, like a few other million readers, loved Stieg Larsson’s books, do go and see this film. It won’t take away from the magic of the novels, on the contrary, it’ll add another dimension to the story.