I cannot tell you how excited I am about The Island Affair, my 8th book! Writing a novel takes a lot of time, so it’s incredibly thrilling (and a bit scary, to be honest) when it’s time to let it out into the world and hear what readers think of the story. 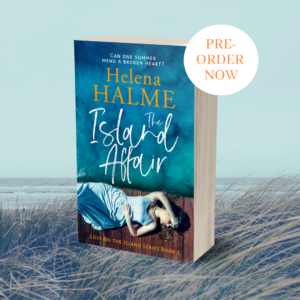 The Island Affair is also the first book in a new series, so there are completely new characters and a new setting. I know the Åland Islands, situated in the Baltic between Finland and Sweden, very well, having spent many summers there. This is partly why I wanted to write about the place.

As far as the characters are concerned, I’ve long had an idea of a woman who left the islands to go to university and ended up living in London. She holds a special place in her heart for her home, and when tragedy hits, the Åland Islands is where she feels happy and safe again. But alas, her British husband doesn’t understand the pull of her home country …

I really hope The Island Affair will take you to a new place. And I hope the reader will get to know and love the beauty of the islands as well as the quirky, loveable islanders – or Ålänningar as the locals are called.

Can one summer mend a broken heart?

After the tragic loss of their 17-year-old son, journalist Alicia and surgeon Liam struggle to keep their marriage afloat. During their usual holiday to Åland, the Nordic islands where Alicia grew up, the rift between the couple deepens.

Enter tall, blonde Patrick, with the most piercing blue eyes Alicia has ever seen. When Patrick confides in Alicia about the near loss of his daughter and the breakdown of his marriage, Alicia is surprised to feel an affinity with the Swedish reporter. He’s the only person who understands her.

But secrets held by people close to Alicia give her life another surprising turn and she finds there is a new reason to live – and love – again.

The Island Affair is now on pre-order on Amazon, iBooks, Kobo, Barnes & Noble, GooglePlay and many more online stores. Tap this link to choose your favourite store.