Before I met my husband I believed Englishmen to be boring. The image of England I had came from the TV series broadcast in Finland in the 1970’s, mainly from ‘On the Buses’.

The series was so popular in Finland that one of the main characters, the forever flirty Jack, played by Bob Grant, made an ad for Finnish TV for liquorice sweets called Lontoo rae.

For those of you who are too young (huh, huh), the 1970’s comedy series, ‘On the Buses’ was based around a bus driver and his conductor and filmed on the number 13 double decker. It was sold to several foreign countries and, for all I know, old episodes of it are still run in Finland.

An incident a few weeks ago made me think how strange life is: not only am I now married to an Englishman, but I also take the number 13 bus to town almost every day.

One day the bus stopped in traffic, facing another in the middle of Oxford Street. A group of tourists in the other bus started excitedly aiming their iPhones at me. I looked around – I was alone on the top floor. Fame at last? For what, though? It took me a while to understand the tourists’ excitement: it wasn’t the sight of me sitting at the front – what they were pointing at was the number of my bus – 13.
Stan and his friends’ fame from On The Busses lives on and I reserve my opinion on how boring Englishmen are… 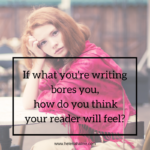