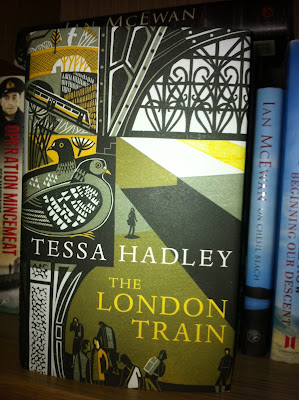 I’ve spent many hours on the train between the West Country and London, so the title of this book immediately spoke to me. I’m also a great fan of Tessa Hadley and her neat writing style; of her slow but determined narrative where an extraordinary story emerges from perfectly ordinary circumstances (taking the train to London).

The story of The London Train is told in two separate parts. First we find Paul at an old people’s home where his mother has recently passed away. We follow him through his grief as he tries to carry on his life as normal with his second wife in the Welsh countryside. He struggles to write – his profession – and to be a good husband and father to his three daughters – two with his current wife and one from a previous marriage. While still having vivid dreams about his mother, he receives a call from his first wife to say Pia has gone missing. Paul goes in search of his ninenteen-year-old daughter, and finds her in a ‘bleakly unloved’ block of council flats near King’s Cross. Unwittingly, he’s sucked into her new world, and into a completely different life from his own literary one in the country. ‘He had always had a superstitious fear of being shut up somewhere without books; now that it had happened he hadn’t even consciously noticed.’

The second story centres around Cora, who after first losing her father, then her mother, decides to leave her civil servant husband and move to her paternal home in Cardiff. In contrast to her hectic city life as an English teacher, she starts work in the local library and begins to examine her life so far: her ambitions after university and the subsequent disappointments of her affluent life with her serious husband in London. ‘I don’t know how people go walking around after their mother dies. I don’t know how they keep getting up in the morning.’

Both of these stories are linked by a chance meeting on the train, an event which happened three years before. At this point the pace of the novel suddenly picks up and we realise why the action in previous chapters has been slow – almost hazy. This is where the brilliance of Tessa Hadley’s writing really comes to its own; with suspending the pivotal piece of plot in the novel to its last part she rewards the reader. The realisation why both Paul and Cora acted the way they did previously becomes clear, their motives understandable whereas before their actions could have been interpreted as rash or inconsistent.

This method of only revealing the past after the main stories of the characters have been told can be precarious – if we don’t know the juicy part, why should we be interested in the characters in the first place? But Hadley excels in describing the ordinary to make it extraordinary – and the satisfaction of knowing the characters when the plot thickens is so much sweeter than it would’ve been if she’d merely told us the story in the usual timeline narrative.

I urge you to go and buy this book, and if you haven’t read Tessa Hadley before, there are three other novels by her to enjoy: Accidents In The Home, Everything Will Be Alright and The Master Bedroom. These are all available from good independent bookshops. (But then I’d say that, wouldn’t I?)