I was all set to go and see a sold out play at The Royal Court by Mike Bartlett called ‘Love, love, love’ yesterday. But as a friend and I approached the theatre there was sign saying the day’s performances were cancelled due to ‘an unforeseen circumstance’. We stood outside dumbfounded for a moment – neither of us had even heard of a performance being cancelled. ‘What happened to “The show must go on”?,’ my friend asked. We debated what to do, and struck upon the idea of going to the nearby Saatchi Gallery instead. We were not put off by bad reviews given to us by a fellow disappointed theatre goer, because art is art is art – even if it’s bad you have experienced something. (That’s my view and I’m sticking to it). Besides, I’d never been to the Saatchi Gallery – being a North Londoner (for all of 18 months!), I now rarely venture out to the SW post codes. (How London am I?)

The sun was beaming down on us as we made our way slowly from Sloane Square towards King’s Road. If you’ve ever been to London in a heatwave, you know it becomes a different city. People are smiling and happy. I myself had forgotten how much I enjoy this part of London, especially during the Chelsea Flower Show. As long as you’re not working in the area, and in a rush to get somewhere, it’s nice to take in the atmosphere which spills out from the annual horticultural show. The whole place is decorated with greenery (even Sloane Square Tube Station has pots and pots of plants), it’s filled with people wearing all manner of hats, and summery clothes, on their way in or out of the flower show.

But boy was it hot! It was reported the temperature hit 30 C in London yesterday. I wore a cotton maxi dress and even though it felt a little too casual for the theatre, I was glad I’d dressed for the weather. (Sorry, no picture – I’m far too pasty to even star in my own blog). 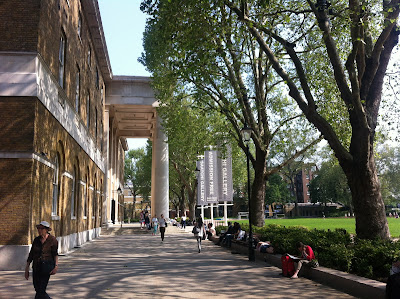 Once inside the Saatchi gallery, housed in a beautiful a Neo-Classical building with added modern touches of glass and steel, we breathed a sigh of relief. Thankfully the air con was on full blast, and for a moment it was nice not to feel that you were in a danger of melting away like a ice lolly into a small puddle on the floor.

When we recovered we went in search of the art. But, the current exhibition at the gallery left both my friend and I a little cold (or perhaps it was the air con?).


Out of Focus: Photography includes some interesting, some not so interesting and many (in our humble view) just ridiculous works. The artists who’s imagery we enjoyed were:

John Stezaker, who combining old, discarded images, creates unusual portraits. These sad, fun and touching images are pictures of old film stars, cut up and paired with other images. Some of stars we definitely thought we recognised, but it was impossible to tell who many of the others were; they just become part of the portrait leaving no trace of their former incarnation.

Those of you who’ve been reading this blog for a time, know that I have a huge thing about maps. I love them in all shapes and sizes, but I’ve never come across maps like the ones Sohei Nishino has conjured up. These dioramas, of Paris, Tokyo and New York, are made entirely of black and white pictures, placed in their approximate positions on a map. The rivers are pictures of the water, the main thoroughfare pictures of the street and so on. The more you look at the diorama, the more details, such as a picture of a little newsagent’s shop in Paris, you spot. These works are really fun and they make you realise towns and cities are made of real buildings, real people and real lives. Suddenly a normal map seems false in some way; too clinical and simple. It would have been fun to see one of his dioramas of London – I wonder if one is in the making?

Katy Grannan’s portraits, shot in LA were the first images we saw, and although at the time I was disturbed by them, I have been thinking a lot about the people in them and wishing I’d taken a second look at Grannan’s work. The images are huge, and sad; they are of people who seemingly have lost hope. They are also shot in the glaring Californian sun, which, you must know, (if you are any older than 18) is the most unflattering light you can ever be photographed in.

Last, but not least, I must mention the permanent installation, 20:50 by Richard Wilson at the Saatchi Gallery. When my friend and I went up to the installation, we first smelled petrol and then gazed down from a balcony at what looked like an architectural display. But when we read the blurb, we realised what we’d been looking at was not a room with six windows, but a room with sump oil, the surface of which reflects the ceiling and windows in the room. It’s only when you look carefully at the surface that you can spot the occasional small cluster of bubbles, or a hair that must have fallen from a viewer’s head. It was the most incredible piece of work I have seen.

The black steel structure on the left is a walkway, which looks like it descends into the oil. It was, unfortunately, closed to the public yesterday. The oil reflects the windows on the left, as well as the ceiling panels from above. I thoroughly recommend you go to the gallery just to see this piece, it is truly fantastic.