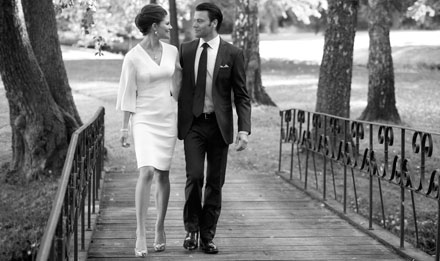 I was glued to my screen for hours yesterday watching live streaming from Stockholm where Princess Victoria married his commoner fiancé, Daniel Westling, or His Royal Highness Prince Daniel, as he’s

now to be known.

This story seems like a modern fairytale indeed. The unhappy, anorexic Princess meets a humble country-bumpkin fitness trainer and hey presto, they fall in love. The King (above with Victoria) disapproves, but true love (and a few years of frog-training under the guardianship of experienced courtiers) conquers.

The ceremony did seem like a fairytale. Victoria wore a simple white dress with a 4-metre long train, lace veil and the same crown which her mother wore 34 years ago when she married King Carl Gustav. The Crown Princess looked stunning. There were several performances in the church, here the couple are listening to Björn Skifs and Agnes Carlsson, winner of Swedish Pop Idol competition in 2005, singing a duet.

King Carl Gustav and Queen Silvia on their wedding day 19 June 1976. Mother and daughter could not look more alike?

After the ceremony the couple were taken in a horse-drawn carriage through the streets of Stockholm, with two secret police (SAPO) officers running either side of them. Those of you who are Stieg Larsson fans know how risky this can be…Some of the streets were lined with volunteers who the Swedish TV presenter let it slip would later receive a surprise medal for their efforts. 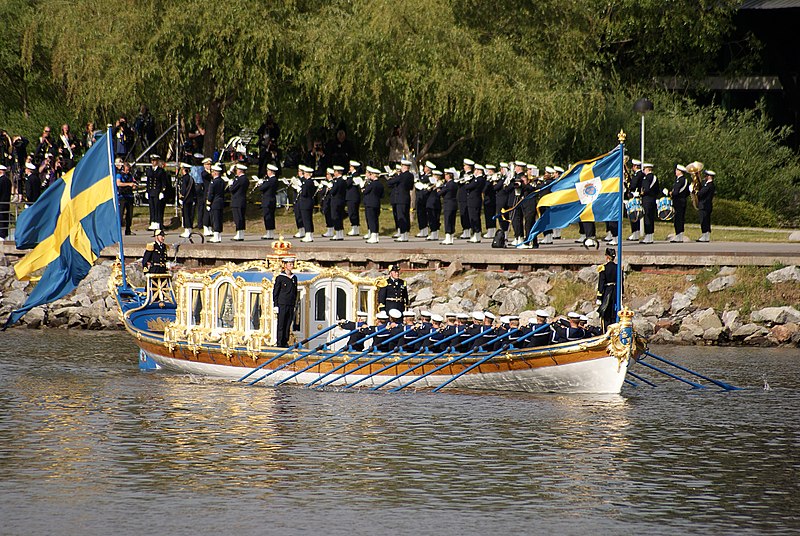 At Djurgården, one of the islands which make up Stockholm, the couple climbed onboard a barge, Vasaorden, which was rowed through the Stockholm harbour to Kungliga Slotted, The Royal Castle, situated close to the Storkyrkan where they were married just an hour before. The wedding reception attended by some 550 other European Royals and guests continued inside, but without TV cameras.

When I logged on at about half past one yesterday, I had no idea the wedding ceremony was just about to start, nor that I could watch it live on SVT (on an annoyingly slow connection), nor that it would keep me glued onto my screen for hours.

I wrote about the fascination I have for this event before, about the nostalgia I have for Sweden and Stockholm in particular. I’ve always felt that this city was where I really grew up from a child to a young woman. Watching the wedding yesterday brought back all the memories of that time. And of course there was the important Royal spotting and dress evaluation to be done in which daughter and son’s girlfriend briefly helped me. And of course there was the city itself.

The weather could not have been kinder to the Stockholm Tourist Bureau. It had been overcast until the moment when the Princess and the Prince stepped onboard their gilded vessel. But as soon as they were afloat, the golden rays of the midsummer sun glistened off the water which dripped from the synchronised rowers’ ores, off the Princess’s crown, and off the Baltic sea. It was a magical scene indeed.