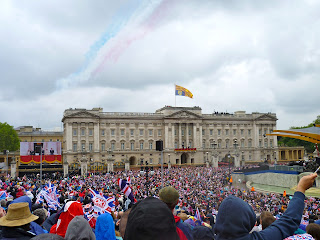 The culmination of the long weekend of Jubilee celebrations here in London was the Queen’s appearance on the balcony of Buckingham Palace yesterday, Tuesday the 5th June 2012.
A few months before this weekend, the Englishman and I won two tickets in a public ballot to watch the Queen and other Royals celebrate the special Jubilee Bank Holiday, on numbered seats in a stand outside Buckingham Palace. Initially I was more than thrilled. That is until I saw the programme: You weren’t allowed to bring in any alcohol, nor large bags…and you had to be seated by 9 am in order to see the main procession and balcony appearance at 2.30 pm. That meant six hours of sitting outside, potentially being rained on (umbrellas were banned), without the champagne hamper I’d planned to prepare for the day.
Still, although the Englishman had seen the Queen at close quarters during his naval career, I’d only seen the Royals on the telly. So it had to be worth the wait?
For our shame we arrived very late (and without a packed lunch) at Buckingham Palace. Together with a few hundred others (I was glad we weren’t the only ones!) we ended up queuing up for over an hour around St James’ Park. Not a good start.
When we eventually took our seats in the stands opposite the Palace and the first military band entered our view, I suddenly felt very odd. What was I doing here? I am Finnish, not English. I don’t belong here, I thought to myself as I sat amongst the Union Jack-clad spectators. Although I wasn’t sorry I was there, at what surely must have been a historic occasion, I still felt a bit strange. There I was sporting a Union Jack scarf myself and waving a Union Flag. I would probably later sing God Save The Queen and Rule Britannia, very patriotic songs extolling the virtues of my adopted country. Yet, that was exactly the point: I lived in the UK but my passport still says I’m Finnish. I felt like I was on one hand betraying my motherland, on the other, pretending to be something I wasn’t: British.
I felt a complete fraud.
It took a firm talking to from the Englishman, ‘Just enjoy the day!’ and a glass of fairly awful white wine (it was cold, that was its only virtue), and a pie (which was hot), bought from one of the food concessions, to stop me thinking too deeply about the meaning of everything.

It would have been difficult not to get swept up by the atmosphere in any case, with or without the Englishman’s succinct pep talk. The crowds, most dressed in Union Jack themed outfits, majority waving flags, all cheerful in spite of the cold and (later) rainy weather, patiently waited for their Queen to appear. To make the hours pass quickly, the crowds in the stands extracted fun from such simple things as watching Queen’s Guards arrange themselves at equal distance along the Queen Victoria Memorial to line the route the Royal family would later take in their open top-top carriages. Before that we’d cheered each Horse Guard, each Royal Marines band, and replied in kind to a couple of policewomen waving flags at the crowd.

Then excitement nearly spilled over when the open-top carriages carrying the Queen, Prince Charles and Camilla in one, Princes William and Harry and Kate in another, rode past. Although they were so fast I hardly got to see the occupants!

Then as the drizzle became rain, the crowd did Mexican waves while waiting for the Royals to appear on the Balcony opposite. At the same time a chill wind started blowing across the stands, and I was glad of my foresight in putting on winter wear for the early June day: a thermal vest, cashmere jumper, fleecy Barbour jacket and a raincoat…

When at last we saw the line of policemen move the crowds from Pall Mall towards the palace, we knew it was nearly time. But just watching the thousands of people, most dressed in red, blue and white, waving flags of various sizes, move slowly around the Queen Victoria Memorial was in itself a spectacle. The theory that crowds behave exactly like water certainly seemed true. The people even swirled like water when they came through the narrow passage between the two stands, slowly moving to either side of the central memorial, and then deciding to join either stream around the memorial. And everyone was so jolly – there was no trouble, just good humoured waving and cheering.

As I sat there watching all the flags being frantically waved and the people enthusiastically chanting, I realised the real reason I love all this pomp and circumstance is the Englishman’s former career in the Royal Navy. I have an acute sense of nostalgia for the marching bands, for the official protocol that an occasion such as a Diamond Jubilee celebration demands. It was a similar kind of world I first entered when I came to England all those years ago. Although obviously not mixing with Royals, there were a lot of official Royal Navy cocktail parties and balls, Remembrance Day services and officer’s mess dinners, with each meal ending up with a toast to the Queen.

But as I said before, I’d never seen the Queen IRL (in real life). When she, together with Prince Charles and Camilla, and Prince William and Kate, appeared on the balcony, they took my breath away. I was then very glad indeed I’d decided to enter that ballot. With the gun salute ringing behind us, the Queen waved, and I waved back.

The day came to an end with a wonderful fly-past, followed by three cheers, led by the Queen’s Guards, and joined in by the rest of the crowd – and by this foreign girl.
‘You can apply for a British passport now,’ said the Englishman when we (again!) queued up to leave the stands. As if being a naval wife for ten years, giving birth to two English citizens and living and working here for longer than I care to remember  hadn’t qualified me already…
This displaced London life is strange indeed.