At last my spy thriller, set during the Cold War, is out! I pressed the ‘publish’ button earlier this morning and now it can be downloaded from both Amazon for Kindle and Smashwords for Apple iPad/Books, Nook, Sony Reader, Kobo and most e-reading apps including Stanza, Aldiko, Adobe Digital Editions and others.

I hope you will enjoy this rather different kind of book, as much as I enjoyed writing it.

The Red King of Helsinki is a fast-moving, atmospheric literary spy novel set in Finland at the height of Cold War in 1979. 17-year-old Pia’s ambitions to win a gymnastic competition between her college and a school from Moscow trigger a set of dangerous events where her best friend disappears.

A former naval officer Iain – a friend of Pia’s mother – is taking an interest in the disappearance, as is a boy in her class, Heikki, who Pia has been in love with as long as she can remember. At the same time, a Soviet official, Kovtun, is hanging around Pia’s school, making Pia’s gym teacher, Leena, blush and stutter. 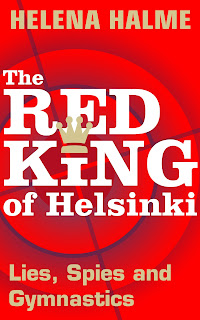 Is the e-book revolution passing Finland by?

A Weekend Reader Offer on Coffee and Vodka!