I was planning to write a post about the Westfield shopping centre in Stratford near the Olympic site today, because last week Daughter and I finally got to go and test this, the newest shopping mall in London. But before I even managed to put one finger to keyboard, I had an email from Bloglovin and saw that my blogging guru and friend, Liberty London Girl, had only yesterday blogged about exactly the same thing.

My experience at Westfield Stratford wasn’t as negative as LLG’s; we actually quite liked the shopping centre. It has all the brands you’d expect and few that you wouldn’t (Mulberry and Prada were a surprise to me, although I never got to sample their wares – read on….).

The staff in the shops seemed friendlier than they are, say, on Oxford Street, and the space was light and airy. There were nice chain restaurants to eat in, as well as the normal cafes and fast food outlets.

I completely see the points LLG makes. (You can read her post here, I won’t recap too much). Even though we had chosen a less busy day, (last Thursday, just before the Easter school holidays in the UK) and a time (11am to 4 pm), and we are both able bodied, it was still a real challenge to find our way around the centre. It’s true that there are far too few signs or maps; the doors are heavy and there could be more guidance on which way to exit the shopping mall. When I wanted to head home, I had to consult a poor shopping assistant on her break to find out if I was walking in the right direction for the London Overground (I wasn’t). The loos are incredibly few and far in between; I can’t imagine what happens when the centre is full – we had to queue at the ladies when it was relatively quiet.

Also due to the lack of maps or directions, we completely missed the outdoor shopping area, The Street, even though we had lunch at Jamie’s Italian – which was very good – and which is situated right by The Street. Hence I missed out on Prada and Mulberry. A shame, although with my strict budget at the moment all I could have done was to drool look. 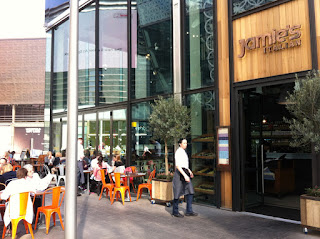 So, for all its faults, Stratford is still a place I’d rather visit once than not at all, especially now when the Olympic site is getting its finishing touches. I, at least, felt quite excited when I got the occasional glimpse of the Olympic buildings. But then, as a fairly new Londoner I sometimes still feel such a tourist when going about the city.