The Swedish Ambassador, Ms Nicola Clase, has opened up her London residence to showcase Swedish modern design during the current London Design Festival. I pricked my ears when I heard Prince Carl Philip of Sweden was going to be in attendance. The Prince has a particular interest in design, and a dab hand himself having recently launched a series of porcelain bowls with Gustavsbergs. I’d never seen a Swedish royal up close, and as you know I’ve got a bit of soft spot for them, so wild horses couldn’t have kept me away from the Design For Everybody event yesterday (Friday 21st September 2012). Although, with a bad back I was forced to downgrade my attendance to a ‘dash & photo & chat’ with just a few of the designers there.

The Swedes really are a clever bunch. Out of the ten or so showcased products I was particularly impressed with a smart looking and effective hearing aid, called Domino and designed by Shift Design. The designer, Carl Hampf told me that Domino both protects the ear from noise (handy for the tube) as well as increases hearing. The sound is more defined with the help of digital processing. I can really see this product taking off, it comes in several colours, has modern tactile design, and is incredibly light.

Another product which caught my eye was an old-fashioned raincoat which reminded me of a yellow Nokia cagoule I had growing up in Tampere. The company, Stutterheim, which makes this luscious looking raincoat has a factory in Sweden where production takes place ‘by hand, day by day’. I am now in love with the Arholma; its simple design, combined with practicality and great colour scheme really appealed to me. Sadly, with a price tag of £435 I might have to save up for my handmade raincoat.

These Brogue slippers by Docksta Shoes, designed by one of Sweden’s foremost designers, Mats Theselius, were the first item at the Design For Everybody event which caught my eye. They don’t look it, but these slippers are incredibly light, while still very smart. As Mats says, ‘If someone knocks on your door (say a Prince, ed), it’s nice to feel somewhat dressed.’ 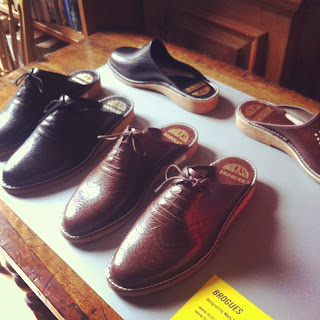 Finally, over buffet lunch (which the Prince tucked into just like any other commoner…) I was admiring the colourful lampshades. I was told later they were left over from last year’s Swedish Design event. Apparently the Ambassador liked them so much, she decided to keep them. Nice work! 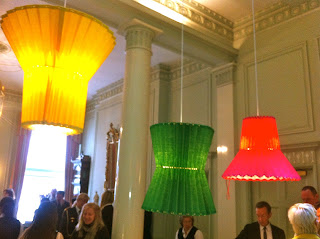 Design For Everybody is open to the public on Saturday 22nd September 1pm–4pm.  Fika and informal sofa talks with the designers and producers. (Fika is the Swedish word for an informal coffee break) Finn Petrén, Mats Theselius, Carl Hampf, Fredrik Lundqvist, Johan Gawell and Alexander Stutterheim will be interviewed individually by Ewa Kumlin, MD Svensk Form. Exact schedule www.svenskform.se