I played a round of golf with husband week before last in Åland, on the lovely Slottsbanan. Before this my fair hands had not touched a driver, nor an iron, or a putter for five years. When we walked up to the range, I wondered if I’d still be able to hit the ball, let alone make 100 yards. The kind English Pro at the clubhouse had lent us a set of clubs each. Mine were Big Bertha’s and as I prepared to take my first shot, a strange rattling noise emanated from somewhere near my right ear. I carried on with the swing and heard an awful cracking sound as the club head hit the ball. I looked down at the borrowed driver and saw a shocking sight: the head was lolling on a broken shaft (can you tell golfing terms were invented by men?). Dumbfounded, I turned to husband who was practising behind me.

‘Must have been broken before you took the shot,’ he said, nonchalantly. Too nonchalantly; I could tell he thought I’d broken the club because he pretended to make a joke about always knowing he’d married a strong Finnish woman…. Luckily the lovely Pro went along with the pretence and even offered to find us on the course later to deliver a new driver. I declined and promised myself never to hit with a driver again.

Until two days ago. My friend and her husband love all sports. Well, almost. They ski (downhill and cross-country), sail and do golf. All of these sports they excel in, unlike me who – to put it VERY mildly – dabble in all of the above.

On Sunday we decided to take advantage of a ‘free’ day in my busy holiday schedule, as well as the lovely late summer weather, and booked a round of golf at their club, Nevas, which lies about 30 kilometres East of Helsinki. 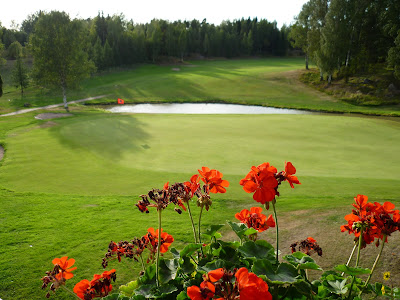 I don’t have my clubs with me so my friend’s husband very kindly offered to lend me a set of his. I took a deep breath. ‘Are you sure?’ I said and told him the tale of the broken Big Bertha. He went only slight pale and nodded, ‘Don’t worry, this is an old set.’ Off we went, me with borrowed clubs, glove, shirt, balls, towel, etc. paraphernalia that one needs to spoil a good walk with trying to get a small round thing in a small deep hole. 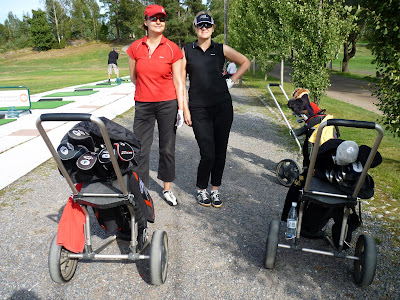 I jest, of course. Though I am a little rusty to say the least, I absolutely love playing the game.You get to compete a little (a lie: compete a LOT) with yourself, you get to be with your friends, you get a good walk in the fresh air – and you get one of these at the end of the round. 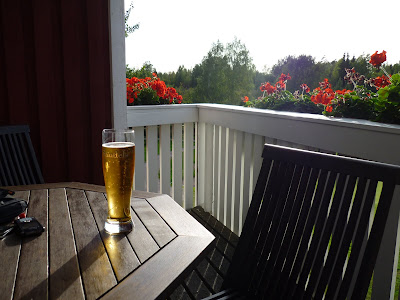 But I must admit I was a little nervous about the Taylor Made driver that I was borrowing. I tried a couple of tee shots with it, but duffed every one. My friends wouldn’t let me give up, so eventually I hit a fantastic shot and literally jumped up and down on the tee. And now I want one. I absolutely need one. It’s got a HUGE head, it’s light and the sound it makes when you hit its sweet spot is magic. (You see what a male orientated sport this is…) There was another club in his bag, a hybrid Mizuno 4 wood which looked like an iron. It could be used on the fairway in places that you cannot use a wood, say in the slight rough. Though it took a little getting used to, it too could make the ball fly much faster than any normal iron, if hit well.

I know I sound very golfy of of a sudden, and apologise to any non-golfers who’ve by now fallen asleep out of sheer boredom. But it’s just so lovely when you are re-united with an old flame, and find that he’s still as demanding and as enthralling as ever before.

Finally a picture of my golfing partner. Isn’t he sweet? 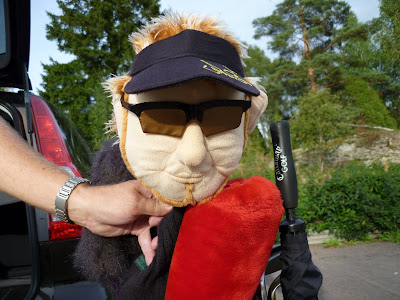 Three films I want to see this autumn