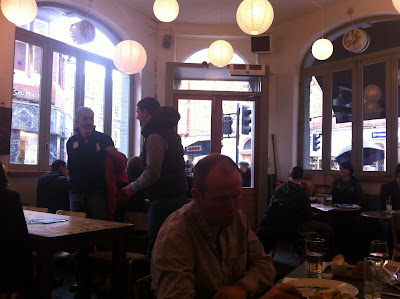 You’d think that amidst a recession on a wet Saturday afternoon, the staff at the gastro pubs in Hampstead  would at least try to act friendly.

In our usual haunt, The Holly Bush, I’ve yet to come across bad service, but oh my, does The Horseshoe miss the mark.

Husband and I met up in ‘the village’ after we’d each had some Saturday errands to run (mine was having a pedicure and a manicure ready for my skiing trip next weekend – not really an errand, I know). I was the last one to arrive and found him in one of the tables in the middle of this trendy pub/restaurant/bar. I was cold, miserable and hungry. Celeriac soup seemed a brilliant choice. I left Husband to do the ordering while I visited the little girls’ room downstairs.

Now, I’ve been to The Horseshoe before and was wary of a report which I read (I think) in the Zagat guide that the food is good but the staff seem to be having such a good time amongst themselves that they forget about the customers. Bearing this in mind, I’ve taken the haphazard service just as a feature of the place.

But after watching the excellent TV series ‘Michel Roux’s Service’ on BBC 2 earlier this year, as well as the ‘Mary Portas: Secret Shopper’ on Channel 4, I am more unwilling to put up with inferior customer service while I am the paying customer.

So, I came up from the rank smelling cellar where the loos are and as soon as I sit down, Husband nods at one of the girls wearing a bright red mini-skirt and heavy make-up. I don’t think she’s his type at all. Besides, how unkind could he be – here I was, as a result of the rainy weather, with hair as if I’d been dragged through the hedge backwards, my feet wrapped up in cling film in my trainers (to stop the varnish from sticking), and wearing no make up whatsoever (I’d left the house in a hurry as usual). 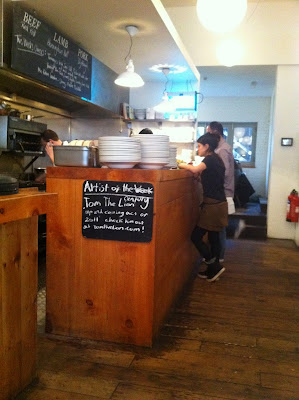 ‘That’s funny,’ said Husband. And I saw what he pointed at was a bowl of chips. ‘They told me I couldn’t have chips.’

‘The woman told me they don’t do side orders so I couldn’t have chips.’

This is taking things a little far, I thought. If they had chips on the menu (which they did) how difficult could it be to serve them as a side? Surely in a place where people bring their kids to eat too, a bowl of chips is the most common side to be sold? Or did she, knowing how unhealthy chips are, decide that a man with greying hair was too old for such a treat?

When our order arrived I was even more amazed – Husband had ordered something which looked very much like a burger. It turned out to be a sausage ring in a bun, but still.

‘And with that you couldn’t have a side of chips?’ I said to the waitress pointing at Husband’s plate of food.

She gave me a look that said, ‘Bitch,’ and out loud, pronouncing each syllable very carefully, said,  ‘Hope you enjoy your meal.’ She turned on her heels and went to talk to her mates – the other members of staff.

It was only because I was starving after the boredom of sitting in one place for an hour and a half, and because of the cold weather that I actually ate my soup, which was nice enough. But then who’d not be able to make a decent bowl of soup out of anything really?