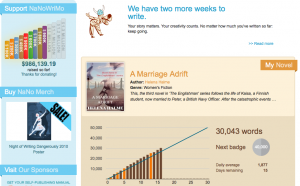 For me, this, the third week of the National Writing Month, has been the most difficult to date.

On Friday after I’d reached 25,000 words and got myself another badge (hurrah), I decided it was time to have a bit of a celebration. After a very late night with friends, Saturday’s word count was the lowest to date, just below the 1,000 mark. No more celebrations and late nights I decided, and on Sunday I managed my usual 2,000 words.

On Monday I just couldn’t get up at my customary NaNoWriMo time of 6am, and when I sat at my desk at 7am, words just were not presenting themselves to me.

Whenever this kind of freeze (or writer’s block for want of another term) happens, I do what my MA in Creative Writing tutor told me, ‘Research, research and research.’ In those days, more than ten years ago, research meant getting out of the house and into a library or newsagents, or out onto the streets. Though I sort of miss those days, being able to go places without leaving your desk is so much quicker and easier.

After an hour or so on Google Streetview and reading hairy newspaper reports on Royal Navy courts martial, I managed to write 2,000 words as usual. But it wasn’t easy and took me the whole of the morning. The poor terrier had to wait until 11 am for his walk, whereas almost every day during the first two weeks of NaNoWriMo, I’ve been done by 9 o’clock.

Again today, Tuesday, day 17 of NaNoWriMo, the words just didn’t flow. After an hour I’d produced only 600 words, so I decided to turn things around. Instead of waiting until the words were done for the day, I had breakfast and took the pooch out for his walk, and decided to return to my writing later. When I sat down at my desk again, with a second coffee of the day, I managed to get up to just over 2,000 words.

Walking the dog, it occurred to me that I’m approaching what I know will be the centre of the novel. The action needs to reach a pinnacle – a sort of eruption where the main characters come together in a either disastrous or a happy plot twist. I know what this twist in A Navy Wife is in broad terms, but I really, really want to make it good, and this must be what’s blocking me.

Of course when I think about it, none of this is new. I must have at least five novels in my virtual desk drawer that I’ve lost interest in around the 30,000 word mark. There is something scary about getting past that word count. It’s as if this is where the novel becomes a reality, and you have to know what you are going to do with the plot and the characters. You also know if the novel is going to be good or not at this stage – or you think you do. It’s that old friend, Internal Critic, who starts to play a part, and before you know it, you’ve convinced yourself that the work you’ve done thus far is rubbish.

But the strange thing is that unlike my previous novels, I know almost exactly what is going to happen in A Marriage Adrift. I even know what’s going to happen in the next novel in The Englishman -series. Having read back a few chapters I also think (in my humblest of opinions) that A Marriage Adrift is going to be alright – possibly my best writing yet. So what is my problem? I wish I knew….

Writing can be so frustrating sometimes – or all the time!

Anyone else have similar experiences?