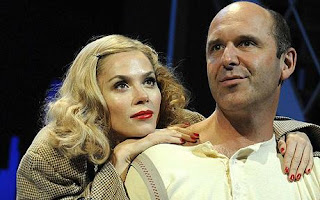 There’s almost nothing I hate more than seeing a bad play. Perhaps expecting a good evening at the theatre and then being utterly disappointed is worse. The waste of your time, money and effort is infuriating to say the least. Added to this, you then have to sit there, clap before the interval and then again at the end of the play.

OK, I’m sounding like a complete lovey, an art buff, who’s life is filled with art gallery visits, plays, exhibitions and champagne events….but I’m not. I am a perfectly normal, financially challenged person who’d rather not pay for bad art.
So you’ve guessed it: I really did not like the Theatre Royal Haymarket’s production of Breakfast at Tiffany’s.
Firstly, the American accents were universally awful. The actors spoke in put-upon phoney inflection no New Yorker would have understood, let alone dreamt of expressing themselves in. Even Miss Friel seemed to have forgotten herself and descended back into ‘English actress does American’ rather than use her considerable experience from starring in a US TV series.
Second, the script, which I believe was probably quite good, lost its effectiveness due to the fast and frequent stage changes. One or two actors would barely have time to deliver their lines, before the stage was dimmed and furniture was moved about, by these same actors or stage hands, and we found ourselves in a different room or a different time of day. If the production was aimed at the 30-second attention span society, it succeeded. I don’t think there was one scene that lasted longer than this. In a two and a half hour play this means a lot of stage arranging.
Many of these short scenes played for either laughs or wanted to titillate. We saw the lovely Miss Friel naked. In what I can only presume was in the interest of balance, the male lead also stripped down and showed us his assets. Give me Dominic West any day. In fact give me a Donmar production every time. Even a bad one. At least what you see at Donmar is in some way honest, done with integrity, with the aim to want to put across the theme and message of the play, rather than what I believe was attempted here at the Haymarket: to sell as many seats as possible with a favourite and actually a good actress in a play that the theatre knew would be popular, in a way (with nudity) that would be popular.
I have nothing against popularity, or popular art. It’s what makes it possible to have culture, to produce art, I get that. But call me a purist and a spoil sport. Nudity is not sexiness. And there was no sexiness in this play which after all was about a prostitute and her life during the Second World War. How can you do that? How can you produce a play with these actors, with this script, with this subject and not make it sexy? Somehow The Royal Haymarket managed it.
Husband, who loved Anna Friel in Donmar’s Lulu, which had more than its fair share of nudity and titillation, had been looking forward to seeing Miss Friel again. But even he thought the play poor. After we’d discussed the various artistic merits of the piece (or lack of them) he made a comment which became my favourite, ‘Her bum was a bit saggy.’ In hindsight, just for those lovely words it was worth sitting through one of the most painfully boring plays I’ve seen in a while.