Thank you for all of those who voted in my little book cover poll. In the end it was the horse that won the race…sorry, couldn’t resist that one. Looking at the cover, I am really pleased with it and I hope you all agree. I am hugely indebted to my excellent designer Simon Wilder for all his hard work on all of my novel covers! 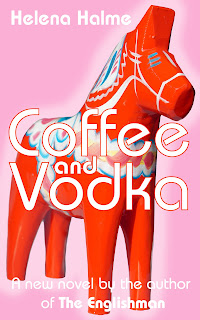 Coffee and Vodka can be found on Amazon here. Don’t hold back in spreading the word…
And now for something completely different; to give you a little sneak preview of my next novel to come out, a spy story set in Finland in the winter of 1979, here is the cover and the first few paragraphs. The Red King of Helsinki will be on out by the end of March. 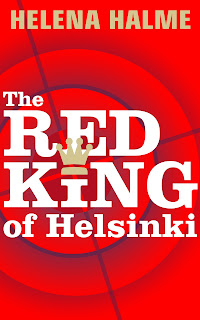 The Red King of Helsinki

A Novel by Helena Halme

Iain watched on the snow-covered jetty as a small tugboat slowly piloted HMS Newcastle into Helsinki South Harbour, frozen but for a jagged shipping lane cutting between thick sheets of ice. He’d been following the gradually expanding navigation lights for over an hour while the faint winter sun rose above the Gulf of Finland.
The snowfall had made the day’s copy of Helsingin Sanomat folded under his arm limp. Iain shivered as he placed the paper inside his thick winter coat and pulled the collar further up around his ears. A glance at his watch showed 08:06. They were on time at least. He stamped his feet. The Finns say the coldest winds blow from Siberia, and this morning Iain understood what they meant. Even the weather from the mighty Soviet Union was a bully to its small neighbour.
Finally the ship docked and Iain climbed onboard. He nodded at a Sub Lieutenant, who bounced down the gangway and told Iain to follow him. He looked like a child, with a freshly scrubbed pink face, and at the last minute Iain remembered not to salute him. He kept forgetting he was a civilian now. But the ship, with its musty smell, a combination of salty seawater and diesel oil, made him feel at home.
‘Good passage?’
‘Yes Sir,’ replied the officer, showing Iain into a small cabin.
The Colonel was bent over a tiny desk in the corner, his back to Iain.
‘Welcome to Helsinki, Sir,’ Iain said. Again the desire to stand to attention overtook him, and he half lifted his hand, but placed it down before it reached the side of his head.
‘Ah, Collins. You look cold and wet. Is it really that bad out there?’
Iain ignored this jibe and looked around the cabin. It was a small space, but a luxury for any officer onboard. There was a small porthole, ‘heads’ and crisp white linen on the bunk. The Colonel nodded towards a chair and Iain sat down.
‘Well?’ the Colonel said. His cheeks had broken veins and in the harsh overhead light of the cabin he looked old and weary.
‘Sir, page five, bottom right-hand corner.’ Iain handed the Colonel the damp Helsingin Sanomat. The short article was on page four.
‘A woman, aged 29, was found dead on Tehtaankatu late yesterday morning. It has been confirmed as the body of a Soviet citizen, employed as a temporary administrative assistant at the Embassy. According to the official source the woman died of natural causes.’
The Colonel considered the page. Iain watched his eyes as he scanned the print and spotted the small, insignificant notice. After a brief moment, he handed the paper back to Iain without saying a word. He crossed his hands over his considerable belly and leant back in his chair. Iain wondered if the Colonel’s Finnish was sufficient for him to understand the meaning of the words.
‘Don’t know if it’s significant, but brought it along in case.’
‘Hmm, well done,’ the Colonel said.
‘I wasn’t sure if I should have contacted the paper?’
‘No, of course not. We’ll look into it.’ The Colonel looked at his hands, then up at Iain, ‘How’s the surveillance going?’
‘Well, Sir.’
There was a silence and Iain wondered if he was supposed to make a move to leave the cabin and the Colonel. But the Colonel handed Iain a green folder.
‘Try to find out more about this man, Jukka Linnonmaa. He’s just come back from Moscow and we need to know how active he is. He might get in the way.’
Iain opened the file.
‘Take it home and read it. There’s the address, wife’s name, any family connections, that sort of thing. Have a little look at his place, see where he goes.’
‘Yes Sir,’ Iain said.
‘You’ll soon get the hang of it. Report back to me daily.’
The Colonel got up, and Iain followed his example.
‘And Collins,’ The Colonel said when Iain was at the door, ‘try not to come onboard too often – once more to welcome us into town on behalf of the British Council, and perhaps when we leave to wave us goodbye, is the norm.’
‘Yes, Sir,’ Iain said. The Sub Lieutenant had reappeared outside the cabin.

‘Goodbye, Sir,’ the young officer said and saluted Iain as he made his way back down the gangway.