On a complete spur of the moment, the Englishman and I decided to go on a pub crawl last night. He’d been going on and on about the fact that I’d not finished The Knowledge (this self-imposed task involves visiting every pub in the area) and thought last night was good as any to finally achieve my goal.

But in order to finish the task, first we needed to avoid temptation and (for once) walk past our local, the Maynard Inn (that of the famous Scotch Egg Friday). Determined, we made our way briskly even past the next temptation on Park Road, our favourite tapas bar, Bar Esteban, and carried on towards Broadway, and up Crouch Hill to The Railway Tavern, a pub we had yet to visit.
The Englishman had a pint of UBU and I a pint of Staropramen. On this sunny evening we even managed to get a table in the little garden at the back. (The whole of Crouch End has been quiet since the start of the school holidays  – the area’s not called ‘Nappy Valley’ for nothing). 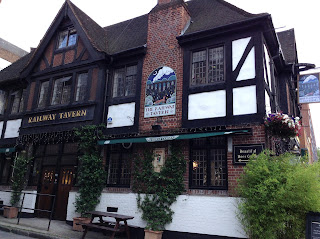 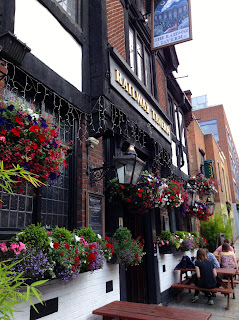 The garden at the back was minuscule, it’s true, but full of flowers and very pleasing to the eye. However, it didn’t satisfy The Englishman, because when we were walking out, he announced, ‘This is a Winter Pub.’ I have no idea where he gets these categorisations from. There’s ‘The Perfect Boozer’; there are pubs that are, ‘A bit too poncy for my liking’ (I suspect my favourite The Maynard comes under this description), or those that are just ‘OK’. 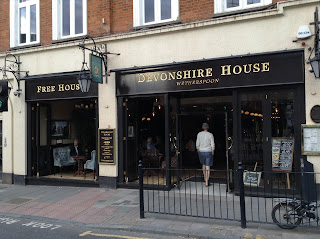 The next unvisited pub on our list was the local Wetherspoon’s, but I wasn’t ready for that yet, so we nipped in for a quick half at the King’s Head. We’d been here before, and if it wasn’t for the difficulty in walking past The Maynard, we’d come here a lot more often. The pub is a traditional one, with swirly pattered carpet and dark wooden interior, but the cellar hosts some of the sharpest comedy acts in North London. There’s always something going on, which I really like. The beer wasn’t bad either, I had Camden Hells and the Englishman a pint of Summer Lightning (he doesn’t believe in halves).
After we’d finished the delicious beers (I do like the Camden Brewery lager), still I tried to wriggle out of going into the Weatherspoon’s opposite. ‘Don’t be such a snob,’ the Englishman said and pushed me across the road. I’m not sure if it’s snobbery, but I dislike pubs that belong to large chains. This one, called Devonshire House, is extremely popular, I grant you. Even at breakfast time when I pass the place on a bus, I often see their regular patrons having the first pint of the day in there. (See why I wasn’t so keen?) But tonight I was on a mission, so off we went. To play it safe, I asked for a bottle of Sol.
Leaving the Englishman at the bar, I found a table in the back. Compared to the other two pubs we’d been to, the place was heaving with almost every table taken. I noticed there were couples eating, or groups of girls having drinks. There was a TV in the corner and some plastic plants around. (Not so good). But glancing at the menu, I noticed they had my current obsession, frozen yoghurt on there. I’ve been wondering why there’s no Froyo place in Crouch End. Idly I considered, that if in dire need, I might venture in here for a hit. 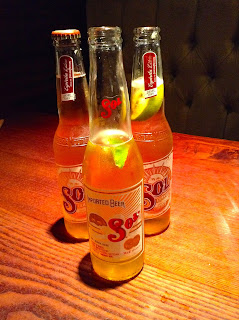 The Englishman arrived at the table carrying three bottles. ‘Somebody joining us?’ I asked. ‘It’s a fiver for three bottles!’ he said. It was then that I saw the reason behind the popularity of this place. (I know, I’m a bit green sometimes). With his infinite wisdom, the Englishman had asked the barman to leave the top on the extra bottle, so we didn’t need to drink all three. Just as well, because I was getting quite tipsy. 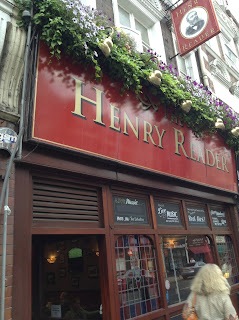 Next (and luckily last) on the list of unvisited pubs in Crouch End was a place, which I’d not even spotted before, on Topsfield Parade. (Just shows you!?). At the Henry Reader there was a pleasant surprise waiting for us. In the mostly empty pub, there were two large screens showing a friendly match between Tottenham (the Englishman’s soccer team for my US & Scandi readers) and a Spanish side, Espanyol. I don’t usually like TVs in pubs (who does!?) but this was different. Two other Spurs suppporters began having an (almost) intelligent conversation with us about the match, about the forthcoming football season, and about whether our best ever (although possibly not – what do I know?) striker, Gareth Bale, would be sold off. 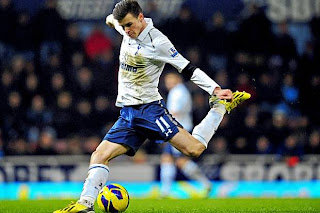 ‘It’s a Spurs pub,’ the Englishman rejoiced (I think he’d had quite enough beer by this stage too) on our way out. I then remembered that the worst categorisation he could give a drinking establishment is a ‘Gooner’s pub’. I knew he wouldn’t even consider stepping into a pub populated by Arsenal fans. With not only officially completing The Knowledge, but also finding a pub which would show away matches, and friendly towards Spurs, on our doorstep, the evening had just about become complete.
So there you have it – The Knowledge of Crouch End Pubs is now officially complete. Needless to say, there was a bit of a headache hovering around my temples this morning….