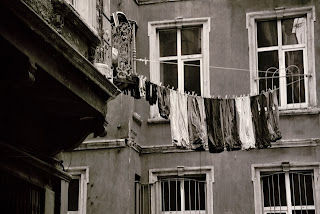 There’s one thing I value more than anything: a good dry cleaners. When we relocated our business premises some years ago, we stumbled upon a great place on the High Street. A shiny star amongst the ramshackle newsagents, charity shops and general tumble weed. And I got to know the man who owns it quite well. He treated my favourite Issa dress with the gentleness it deserves. We had a lot in common..

We’ve since moved away from the business, but I still take my dry cleaning to him, especially after a Milly dress was ruined by a branch of a well known high-street chain of cleaners.
But possibly not for much longer.
It may not be immediately apparent to the average reader of this blog (especially as I have decided to share my life story with you) that I am in fact quite a shy person. So when the dry cleaner man shares his secrets with me I grow uneasy. When he talks to me about his love life, I blush. In the last six months he’s told me everything about his recent divorce and about the love he found with someone new, who ‘looks a bit like you’. It’s got so bad that each time I visit his shop I pray that instead of the owner, I would be served by some of the ladies he employs. Anyone but him.
This, together with the distance, is why the dry cleaning bag has recently got out of hand. It’s mostly summer stuff from our late holiday to Rome, but still needs doing. Last weekend, as husband and I were on our way to Portsmouth and would for once go in the right direction, I decided to take the plunge. Before popping the bag in the boot, I went through it, checking that there was nothing that could be hand washed. (Dry cleaning also costs a small fortune.) That’s when I spotted the Myla underwear husband had given to me the previous birthday. I checked the label, ‘dry clean only’. My mouth went dry.
‘Did you put this here?’ We have an arrangement at home: husband is in charge of washing clothes, while I do everything else. It works well, at least for him. ‘There’s no way I can face him with this.’ I said lifting the delicate silky pieces up for husband to see.
‘Don’t be silly!’
I gave him my serious look.
‘OK, I’ll go in with it,’ he said laughing. It is he who should be the Finn, I thought. He’s much more at ease with nakedness, doesn’t worry about what people think, and in general has a much thicker skin than me.
But when we got to the High Street, unusually, there was no space to park in front of the shop. On top of that it was raining heavily and we were running very late.
‘Shit,’ said husband and gave me a look from under his dark eyebrows. He was driving. ‘Shall I double park?’
‘No, I’ll run in with it. He’s probably not even there.’ I felt I was being a little silly; what’s shameful about a few pieces of underwear?
‘Hello, Mrs H!’ The owner of the shop greeted me like a long-lost friend.
I emptied the bag of clothes onto his counter and prayed the empty shop would remain so: empty. I didn’t need an audience as well.
‘I’ve got quite a few things, but I’m in a bit of a rush.’
Immediately the man’s eyes found the skimpy knickers, bra and babydoll. All in dark lilac colour, with satin bows and see-through silk tulle arranged what to me had looked artful and sexy, but now seemed seedy and far, far too young.
‘How are you? Haven’t seen you for ages,’ the man said, lifting his eyes to me from my underwear for just a fraction of a second.
‘I’m well, but in a rush, as I said. I think there are two pairs of trousers, a couple of dresses, and, well…’ I took a deep breath in, ‘those things, which I’m a bit embarrassed about.’
‘Oh, those…’ He looked up at me again, ‘No, don’t be. I’ve cleaned everything from…’
‘Anyway, I’m in a bit of a hurry, so…’ I managed to stop him in time. I really, really did not want to hear about other people’s embarrassing dry cleaning as well as my own. I resisted the temptation to grab the clothes, and run out of the shop never to return. Instead I straightened my back and thought about the ruined Milly dress.
Eventually after about fifteen minutes, while the man slowly lifted every item of my dry cleaning and entered it onto his till, I got the yellow receipt and ran out of the door and into the car.
‘OK?’ said husband.
‘It’ll be ready on Friday. And you will be the one to get it back. Now drive!’
Husband laughed almost all the way down to Portsmouth.

Of no fixed abode