I was greeted with a lovely smell of baking when I came home tonight. As evidence that daughter is truly on the mend, she’s been making cinnamon buns. This is what they looked like. 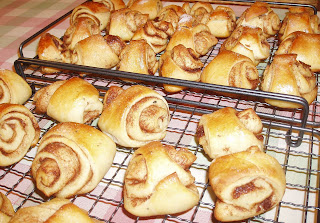 If I could transport the scent through the ether I would. Divine. They serve these in the Nordic Bakery in Golden Square in W1. Being biased I think the ones daughter makes are far superior. They are smaller, and she keeps them light and not too sweet. Here’s the recipe:

For the filling:
ground cinnamon
sugar
soft butter
Activate the fresh yeast in the milk. This takes up to 10 minutes depending on the quality of the yeast. If using dried yeast mix it in to the dry ingredients. Add the egg, butter, cardamon and salt and finally slowly mix in the flour to make a dough. Knead until it’s soft and pliable. Prove the dough for about 1-2 hours until doubled in size. (If using dried fast acting yeast you can make the buns straight away).
When the dough has proven, roll it out to an oblong of about 2-3 mm in thickness. If you find it easier you can do this in batches, as long as one oblong piece is about 30 x 35 cm. The larger the oblong, the larger the buns and the more layers they’ll have.

With a knife, spread some butter on the dough, just as if you’d be making a sandwich. Sprinkle with sugar and cinnamon. Then, starting at the long end of the oblong fold the dough on itself. You should end up with a tightly packed roll.

Cut the buns out on the diagonal with a sharp knife, alternating right-left, so that you end up with cone-like shapes. Now stand each piece on its fat side, and press down the middle of the thin edge with the blunt end of a knife. They should now look like smaller versions of the picture above.

Let the buns prove for another half an hour on baking parchment. Bake, spaced well apart, in 180 C oven for about 20 minutes, depending on their size. Before putting them in the oven, you can also brush them with a whisked egg, and sprinkle with white sugar crystals. If you can get hold of sugar cubes, crumble these and add instead. I don’t add sugar since there’s already quite enough of the stuff in the buns. Either way, they’ll come out delicious, I promise!

In Finland, these little treats are called Korvapuusti, which also means a slap around the ears. Why, I have no idea!
Hope you enjoy, I’m just off to make a cup of coffee with mine.