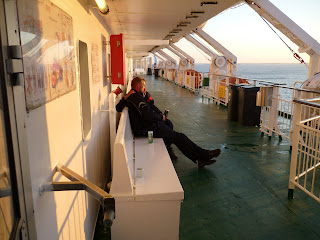 Being back in your home country can be equally as tricky as being a foreigner – immigrant – abroad.

First of all there are all the emotions that family re-unions can ignite. Sometimes they are beautiful and lovely, sometimes an old, deeply buried resentment raises its ugly head and bites the homecoming queen in the bum. The least said about this the better.

Then there are the small cultural differences that you’ve forgotten about. When I come anywhere near any of the Nordic countries, be it Finland, Sweden or the Åland Islands (where we are at the moment), the first thing that strikes me is the lack of general politeness and social consideration. No-one holds a door open for you. No-one greets you with even the slightest of  nods, whether you are the only other person walking along a deserted country road or not. Very few people smile.

It takes me a few days to remember that these people are not miserable, nor impolite. It’s just the way they are; serious and private. Finns are more extreme then Swedes; Ålänningar lie somewhere in between. They say what they mean, they don’t speak unless it’s necessary to say something. They arrive at parties on time and they expect you to do the same. But the consequence of this sincerity is that ferries run on time, bank cards arrive a day before they were promised. Everything works and you can trust that if a person says they’re going to do something, it’ll happen.

While we were considering the Big Move, both Stockholm and Helsinki were mentioned. But however much I love being able to catch a train and know it’ll arrive on time, or walk along a street and know it’ll never be as crowded and claustrophobic as Oxford Street on any given Saturday afternoon, I don’t think I could cope with the insular Nordic character. Of course not everyone is like this – I’m generalising terribly. My friends and family are completely different; besides they know my English ways and pander to them.

But I believe that if I’d moved back, after a few months in either Helsinki or Stockholm, I’d be that crazy woman shouting obscenities at passers-by, venting my pent-up anger at my fellow countrymen. In other words, I’ve become too English, too corrupted to leave the UK. It’s just simply too late for me to go back. And that, ladies and gentlemen, makes me very sad indeed.