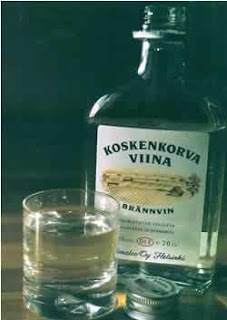 The rest of the summer of 1983 in was glorious. But the weather didn’t suit my mood. If it hadn’t been for my good friend at the of Economics, I don’t know how I would have survived the latter part of that year. By the end of July she’d finished her finals and submitted her thesis, which she’d written in record time. Now she was ready to party. So party we did. During the day I worked at the bank and at night we were out in the university disco, or in the Helsinki Club, or a favourite summer place called the Pikku Parlamentti. It was near the Finnish Parliament and only open in the summer. With some tables outside and sliding glass doors facing the park which sloped into the sea, it was a perfect place to celebrate a graduation. There, and elsewhere, we often bumped into the old gang of year four boys, and sometimes even exchanged a few words. Who spoke with whom didn’t seem to matter so much anymore, although, unlike my friend I’d still have to see everybody at the University in the autumn. I had a few exams to take as I’d lost time with the change of subjects in my second year, and hadn’t even decided what the title of my thesis would be.

As usual it all depended on the Englishman.

The ‘If we can marry I can have a work permit move to , but if we can’t what then?’-question was always on my mind. When the Englishman phoned, which he did at least twice a week, we skirted around the issue. First when I’d returned from , I’d asked him every time if he’d heard from the Appointer. But when after a few times the reply was a short ‘No’ I didn’t ask anymore. The Englishman was in the middle of a tough course and he too had exams to study for. He told me it was very important for his career to do well in the course. So I let him be.

Still he kept telling me how much he missed me and loved me. How much he longed for the day I moved to . We speculated whether I might get a work permit through a job in the bank I’d been a summer intern for in . My bank manager had told me they were opening a Commercial branch in . He’d even organised an interview for me with the man heading the new venture. But there seemed to be no word from the Navy. Whether they’d allow the marriage to a girl from a country so near the Eastern Block, or whether it would prove too much of a security risk to an English Naval Officer. It was as if my life was hanging in the balance. I couldn’t even decide which subject to write about for my thesis. I had three choices. The one I wanted to do was about British party politics. But for this I needed to do the research in . Handy if I was living there, impossible if it all fell through.

As the nights drew in and descended into its annual depressive winter hibernation, I returned to lectures at the . By September there was still no word from the Navy.

My professor was pressing me on a decision on my thesis, but I stalled.

In November the Englishman called, ‘I have Christmas and New Year off!’

I spoke to my Father the next day. ‘Christmas? Here?’

‘No, I’m not having any guests here. Christmas is a commercial invention anyway, for shops to sell more stuff.’

He’d been in an unusually bad mood for weeks. I guessed he’d had a fight with his girlfriend because he spent all his evenings and nights at home, monopolising the TV and complaining if I watched anything after he’d gone to bed.

I looked at him. I wanted to say, ‘What about me?’ or ‘Please can we have a family Christmas here, just like we did when I was little?’ but I didn’t. What if he sneered at me or worse, started to complain about my mother. Tell me some story or other how awful Christmas was with her. I wanted to hold onto my childhood memories.

I spoke to my mother instead. She was delighted and said it’d be a special Christmas with the Englishman there.

There was no snow in when the Englishman’s plane landed on the Saturday before Christmas. The city looked grey with the lights over Alexi reflecting on the black pavements instead of the sparkly whiteness of snow. I took the bus to the airport and prayed the weather would turn colder. The Englishman had two weeks off and flew to see me first in . The plan was then to fly together over to for the holidays and back again to spend New Year with my friends in . When I saw him through the glass at the arrivals hall, giving me a shy wave and rushing towards me with a bag over his shoulder, I didn’t give a thought to the distant future. The next fourteen days were all that mattered.

My father was waiting in the kitchen when we arrived. In front of him was half-full bottle of Koskenkorva and an empty tumbler. He shook the Englishman’s hand and took another glass out of the drying cupboard. With a nod to the Englishman he filled the two glasses up to the brim and lifted one to his lips. The Englishman looked at me, winked and emptied his glass. He made only a slight sound as the strong vodka flowed down his throat.

‘We’re going out tonight,’ I lied and took the Englishman’s hand. The Englishman coughed.

‘Even more reason to start the evening off with style,’ my father said and poured another round. I looked at the clock on the wall. It was just past four o’clock in the afternoon.

‘It’s alright,’ the Englishman said and lifted the second glassful to his lips.

‘I won’t see you until next year,’ he said and took a wad of 100 mark notes out of his wallet. Have a few drinks on me, or even a meal.’ He laughed, hugged me and shook the Englishman’s hand.

When the door shut behind my father I shook my head. ‘He didn’t tell me he was away for Christmas. They must have made up and are going up to see the girlfriend’s family in .’

The Englishman came to sit next to me at the kitchen table. His eyes looked cloudy. He kissed me and said, ‘Can we go to bed now?’ 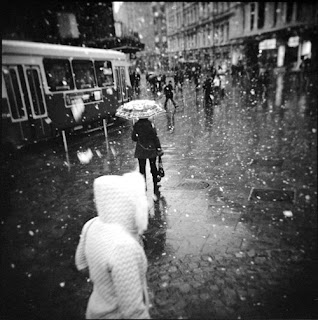 ‘What do you want to do today?’ the Englishman asked.
‘Go into Helsinki for some Christmas shopping?
It was drizzling with cold rain, almost sleet. We spent an hour walking around Stockmann’s, holding hands. The Englishman kept stopping to kiss me. He didn’t seem to mind how people everywhere stared when he did that. He didn’t speak much. Suddenly as we were queuing up to pay for some Fazer chocolates I was getting for my sister, he said, ‘So your Father, am I going to see him again?’
I looked at the Englishman. He was wearing a thick puffa jacket, jeans and a thick jumper. Even when he wasn’t kissing me, with his dark hair he looked foreign and attracted sideways glances from other shoppers. ‘Again?’ I asked.
‘Yes, before I go back.’ He looked uncomfortable. A man in front of us in the queue turned around when he heard English was spoken. His eyes wandered from the Englishman’s dark features to my blonde head. There was strong disapproval in his gaze. I stared at him and eventually he turned back to face the till.
The Englishman widened his eyes and moved them towards the man’s back in front of us. I shrugged. ‘No, don’t think so, my Father’s away for the whole of the holidays. Why?’
‘Nothing,’ he said and pulled me towards him for another kiss.
‘Can we go for lunch somewhere?’ the Englishman said when we were walking out of the store.
The sleet/rain was still falling and even though it was only twelve o’clock and in spite of the Christmas lights above, the street looked dark. I saw the bright sign of the new American hamburger bar opposite and started running towards it, dragging the Englishman behind me.
‘It’s not McDonald’s but they do a rye burger.’ I said.
Inside the Englishman looked around the small space. ‘You sure this is OK?’ he said.
The place was called Hesburger and being new, it was fairly full. As usual people stared when we entered. I looked at the Englishman. ‘Yes, we just want a quick bite, yeah? And it’s raining.’
After some translation of the menu, we got our bags of food .
‘Let’s sit by the window,’ I said and nodded to one of the red plastic tables and chairs.
The Englishman looked at me across the table. He hadn’t touched his burger.
‘Aren’t you hungry?’
He reached across the shiny tabletop and took my hand. His fingers felt cold against my skin.
‘You know I love you.’
The Englishman’s mouth was a straight line. His eyes were wide. He looked almost scared. My heart sank. ‘I know.’ Had he heard from the Navy Appointer? Was this bad news?
The Englishman pulled something out of his pocket. It was a small black box. ‘This isn’t quite the kind of place I imagined I’d do this, but…’He looked me deep into the eyes and opened the box to show me the contents.
I saw gold and glittery stones. I looked up at the Englishman.
‘And I really wanted to ask your Father first.’
My mouth was dry, I couldn’t speak. I wanted to throw myself at the Englishman. Kiss him, hug him, feel him close to me. But the people around us, munching at their burgers, loudly sucking at their straws at their near empty paper cups of Coca Cola, with the smell of French fries everywhere, made me stop myself.
‘So, what I’m asking, is…’
Still I couldn’t speak. And the Englishman was struggling to say the words. I wanted to help him and say, ‘Yes, yes, a hundred times yes,’ and very nearly did, but then realised he hadn’t actually asked me yet. What if by some strange miracle I’d completely misunderstood? I looked down at the ring in front of me, then at his straight mouth. How I wanted to kiss those narrow lips, taste the cigarettes and mint, feel the roughness of his always unshaven-looking face.
‘Would you please marry me?’
I smiled and said simply, ‘Yes.’