At first Radio 1 sounded very American to me. All laughter and superficial chatter. But it played the hits I didn’t even know to crave for in Finland. The station was always on in the car or in the terraced house in Southsea. The Englishman sang along, ‘Every little thing she does is magic, magic, magic’, or ‘I’m just a jealous guy.’

Half way through the first week he drove me to the country to see his parents. I wore my now familiar Red Sox cap to keep my hair in place in his yellow sports car. ‘How far is it?’ I asked when we were in Salisbury. The Englishman must have noticed a nervous note, because he squeezed my thigh and smiled. ‘I’ll let you know when we’re ten minutes away.’

The Englishman’s mother was attending to a flower bed outside a pink house. She gave a little laugh as she kissed her son and shook my hand. ‘Hello, so nice to meet you at last.’

It was Wednesday lunchtime and the Englishman’s father was still at work. Wearing an apron, his mother made us home made chips and served them with thick slices of ham. We ate in a large kitchen overlooking a green lawn and chatted about what we’d done during my two days in Portsmouth. She wanted to know when I’d arrived and when I was going home. She raised an eyebrow when she heard I lived alone in a flat in Helsinki. I wondered if she knew my parents were divorced.

‘I’ve put you in the blue room.’ She lifted her eyes towards her son. ‘And you can sleep in the yellow one.’

It was like a scene form Jane Austen. I didn’t dare to look at the Englishman. I thought about his bedroom back in Southsea. On his wall he had a large poster of a girl playing tennis, showing her bare bottom. He also had a Pirelli calendar with scantily clad women on every page. What would his mother say if she saw them?

The Englishman’s father was a charming man with almost white hair. When he came home his piercing dark eyes fixed on me. ‘Hello,’ he said simply, but smiled as he shook my hand and nodded as if to show me his approval. He put on an LP of Sibelius and told me how he admired the Finnish soldiers in the Winter War. ‘Brave men. You stood up to the Russians, eh?’

That evening the Englishman took me out to a pub in a pretty village called Lacock. The place was dark, with low rustic beams. We sat around a large unlit fireplace and chatted to his school friends. They surveyed me from under their eyebrows and were surprised I could speak English. Late in the evening as we tiptoed into the house, the Englishman kissed me softly and said, ‘I’ll come into your room in the morning when my parents have gone to work.’ 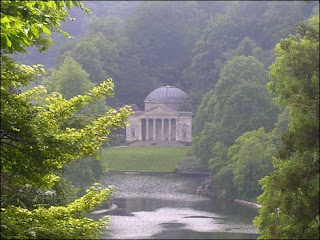 The Englishman took me to Stourhead. He said it was prettier in May when the Rhododendrons were in bloom. I couldn’t understand how those lush gardens could look any more beautiful. He also took me to Longleat, where we wandered hand in hand through the ancient manor house. And we spent a day in Bath. I fell in love with the Roman Spas, the Georgian architecture and the smart shopping streets. Cautiously I wondered if one day I might live there.

At the end of the visit, when I thanked the Englishman’s mother, she said. ‘Oh, it’s my pleasure dear. I try look after all the girlfriends my son brings home.’

The Englishman laughed nervously. On the drive back to Portsmouth I looked at his handsome profile as he negotiated a large roundabout. How many girlfriends had there been? Did his mother want to warn me? Was I taking this relationship too seriously? More seriously than the Englishman? Perhaps all the sightseeing, the introductons to various friends and the love letters were something he did all the time. He certainly seemed practised at making a girl feel special.

For once, when the car sped up and the fast rushing of the wind made it impossible to talk, I was grateful. I was too busy to stop the tears from smudging my make-up.