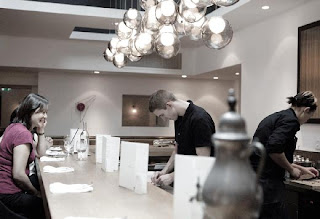 It’s our second wedding anniversary today (not as in being married for two years…explanation here) and as a surprise the Englishman took me out to lunch to the Pollen Street Social. It’s the latest, post-Gordon Ramsey venture by Jason Atherton, who himself can be classed as a celebrity chef after his several appearances on Saturday Kitchen and The Great British Menu. 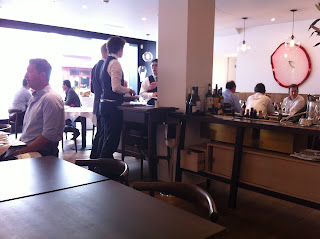 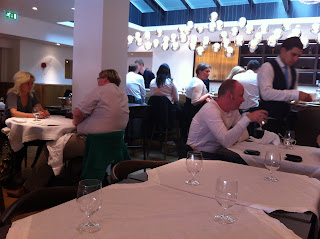 I am not usually one for celebrity chef restaurants. In my opinion far too many of them are all hype and no substance, so I was more than apprehensive when we sat down in the airy, simply decorated dining room. The matters were not helped by the fact that we had a table right in the fairway of the restaurant and were surrounded by waiters and sommeliers rushing around us.

We started our lunch with a glass of pink champagne, properly chilled and excellent, although I forgot to ask what it was called. The Englishman took the advice of the sommelier and ordered the house white, a choice that was just perfect to go with our food.

While I was in the loo before the food arrived, the Englishman asked if we could change tables and were given a much nicer one further into the room. Sitting on a sofa facing the restaurant, I was beginning to feel a lot happier.

We’d both plumped for the set menu and started with the pea soup with English crayfish. The Englishman had his hot, (there was a choice) while I wanted a cold soup on such a hot day. (The air conditioning was on the blink in the restaurant so I was glad of my choice). The pea shoots, tiny mushy peas and crayfish were absolutely sublime. Crayfish is notoriously difficult to get right, but this was not at all chewy and there was a richness to the taste that worked incredibly well with the sweetness of the pea. I declined the offer to taste the Englishman’s hot version – so happy was I with mine. (I also forgot to take a picture of the dish).

Next I had English asparagus (the season is so short so I can never resist them) with a poached egg, cauliflower and its foam, plus smoked haddock. The flavours were again incredibly pure and reminded me of the food I had in the Northern Swedish restaurant Fäviken. The Englishman was very happy with his hake with squid ink rice, which I could easily have chosen too.

For pudding I had an ‘off the set menu’ choice: tomato and strawberry gazpacho with black olive sorbet. It sounded so weird I just had to have it.

When the dish arrived our friendly waiter told me I’d be advised to have a little of the soup with the sorbet to get the best out of the dish. I followed his advice and – wow! It was incredible. There were even wild strawberries in my bowl and when I asked where they were from we had a long conversation with the waiter about wild berries (I know how to have fun). He was from New Zealand and we both felt the best wild berries were found in our native countries. But when he asked the chef he found out the ones on my plate were from South of France.

The Englishman had some kind of chocolate fondant with hay ice-cream. He reported it was excellent, but I was having such a flavour revolution in my mouth, I didn’t want to spoil it with anything.

With our coffees there was a little surprise – a piece of chocolate cake.

And to top it all, we were given two scones to take away. What is not to like?

At the end of the meal while I took some photos of the restaurant (above), I spotted Jason Atherton having a chat with few other chefs. Feeling very bold I asked if I could take a photo of them and was rewarded with a chat with the chef himself.

Just like his new restaurant he was enchanting. I was struck by his modesty and something else – he had almost an air of apprehension about him. He apologised for the lack of air conditioning. I tried not to be too gushing, but the truth is that the whole experience could not have been more perfect. We will definitely go back and if you have an opportunity to try his place I urge you to do so. It’s not cheap but at the same time many celebrity chefs charge a lot more. The set lunch menu was £20 for two courses or £23.50 for three. Good value in my book.

Now I think I might have another little drink of the bubbly kind; anniversaries only come once (twice) a year after all!

August is for Crayfish