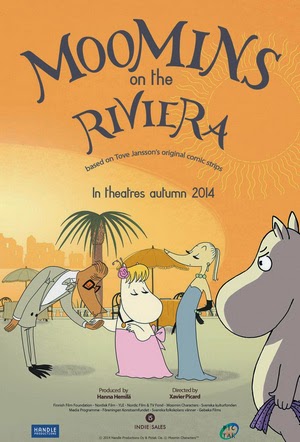 I am so excited to be able to share the English-speaking cast of this new Moomin film, announced in Helsinki today, with you. I’m particularly excited about Russell Tovey and the local North London stand-up comic, Dominic Frisby. I cannot wait to see the film!
The hand drawn animation feature Moomins on the Riviera’s English cast is revealed:

MOOMINS ON THE RIVIERA, based on the original comic strips by the celebrated author, painter and illustrator Tove Jansson, is a bitter-sweet adventure taking the Moomin familyfrom their beloved Moominvalley to the glamorous Riviera, where Moominpappa befriends an aristocrat and adopts the name ‘de Moomin’,  where Snorkmaiden is dazzled by the attentions of a playboy and Moomin learns that jealousy’s sting is the most painful of all. For the very first time, the unity of the Moomins is threatened.
A Finnish/French co-production, the film is directed by Xavier Picard and produced by Hanna Hemilä.