This is the first of a monthly series, New Book Releases. My aim is to introduce you to new authors and books you may not have heard about. The books will be in various genres and I may even throw in the occasional non-fiction title. The posts will be up on 2nd Thursday of the month. 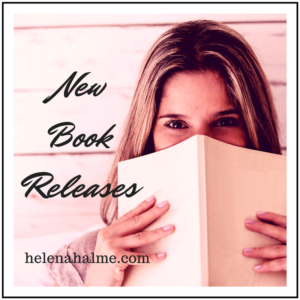 This July, I’m speaking with Clare Flynn, a historical novelist. Her latest title, The Chalky Sea, was out earlier this month, so you’re going to find out about a very new book indeed! I hope you enjoy reading about this month’s New Book Release.

1) Please start by telling us about your writing. How would you characterize your fiction?

First and foremost I aim to tell a good story. I want people to find it hard to put my books down. I know it’s working when I get emails from readers telling me they have stayed up all night or cooked their supper with the book in their hand. That means having characters that people care about – whether you love them or hate them – and I have a mixture of both sorts. My baddies are never wholly bad and the goodies always have flaws.

One of the start points for my books is location. There are some places that call out to me and get me thinking –who has been here before? What were they doing? Back in 1996 I went to Sri Lanka and can still remember the story I made up in an old ex-colonial country club there –I haven’t used it yet. I also take a lot of inspiration from landscape. I see location as another character.

In terms of themes, I write a lot about displacement – often geographic, but always out of the comfort zone. I like grabbing my characters and putting them in places and situations that will cause them to struggle.

2) Your latest release is a historical novel called The Chalky Sea. How would you describe the novel?

It is set during World War 2 and tells two intertwined stories – two characters both with troubled pasts – and the two threads come together before the end of the book.

One strand is about Gwen, a thirty-something woman, childless, whose husband is overseas fighting in an unknown location for what we now know to be Special Operations, but then was shrouded in mystery. Gwen appears emotionally cold, but has a lot of suppressed feelings. She is stranded (by choice) in Eastbourne after most of the townspeople have been evacuated due to the bombing and the expectation that it will be a beach-head for the German invasion. War allows Gwen to escape from what has been a humdrum life and find purpose and meaning.

The other main character is Jim, a young Canadian farmer. After agonising whether to join up, he makes his decision on discovering the secret his fiancée has been keeping from him. War for Jim, unlike Gwen, at first, is a dull affair. Stuck in the British army garrison at Aldershot, he is far from the action and more likely to die of boredom than enemy fire.

These are two people who would never have met in normal circumstances – people from different worlds are flung together by the war. It is about how that brings about changes – good and bad.

3) The Chalky Sea is a historical novel set in the 1940s. Tell us about your research for this story?

The first was Eastbourne at War by George Humphrey. This was published by the local newspaper group and is full of detailed accounts of the bombings and the casualties inflicted, as well as atmospheric photographs that really bring home the devastation caused by the air raids.

The second, Canucks by the Sea by Michael Ockenden, offered a wealth of information on the Canadian wartime presence in the town.

On top of these subject-specific books, I did a lot of reading about Canada, the Canadian army, wartime Britain and 1940s Eastbourne. I visited museums and talked to Eastbourne people who were around during the war. I watched movies set in the period – and made in the period.

I visited most of the locations in the book – although not Ontario. I hope to organise a Canadian trip in the near future as I am now writing a sequel set in Canada.

4) I’m always fascinated by how authors find their subject matter. What inspired you to write The Chalky Sea?

I spent my teenage years in Eastbourne, but was completely ignorant of the town’s role in the Second World War. When I moved back here just over a year ago, I happened upon some information online about the town during the war and – surprised at its significance – set out to learn more. What I uncovered made it impossible for me to resist writing about it – although this was not part of the plan when I moved here! 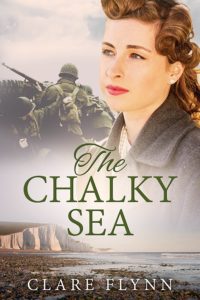 I have always loved wondering who might have been in places I have lived in in the past, and as soon as I moved into my 1900 house up above the town, I started imagining who might once have gazed from the same windows over the grey-green chalky sea – and that’s where Gwen came in. Once I found out that the Canucks parked their tanks at the top of my road, and that the first German plane shot down over the town landed in a school playing field at the other end of my road how could I resist?

5) Your background is in marketing and business. How do you think your previous experience has helped you in your career as an author?

I don’t think it’s helped me as an author in terms of writing – but I suppose it is helping me as a publisher. It probably also helps me in my research – sorting the wheat from the chaff, organising information, knowing where to look.

I suspect I also underestimate how much it helps me – as I find marketing myself as an author and marketing my books so much harder than in my business career – but I am sure some things are second nature to me so I take them for granted. That said, book marketing is a huge learning curve!

6) Which other writers have most influenced you?

Aaagh! I hate this question as there are so many. I read more when I was younger and without the distractions of social media, email and streaming TV. I still read voraciously – but at MUCH slower rate than before.

7) What is your experience of being an indie author and do you have any good tips for aspiring indie authors?

I never set out to be an indie – I started down the traditional route with a literary agent who worked really hard to sell my first book. When it didn’t sell to a publisher, I decided to experiment with self-publishing and have never regretted the decision. I love the control you get from being indie and I have discovered a wonderful supportive community of other indie authors.

My top tips are:

8) Tell me a little about your previous books. Would you say there is a common thread running through your novels?

A Greater World is set in Australia in 1920 and tells the story of Michael, a lead miner, and Elizabeth, a middle class woman who meet on a voyage to Sydney from Liverpool. They never should have met – but a classless ship flings them together. Both are torn from familiar surroundings and each has to make their way in a tough new world.

Kurinji Flowers is about Ginny, a debutante in 1936, who is disgraced and jumps into a marriage as an escape route. Adapting to colonial life in India is a struggle and Ginny is caught between two cultures, afraid of one and rejecting the other.

Letters from a Patchwork Quilt begins in 1875 and moves from Derby and Bristol to New York, St Louis and Middlesbrough. Eliza is stranded, penniless, en route to America and Jack is forcibly displaced to the north of England. Both are torn out of their idyllic lives into tough challenges – but they respond in very different ways.

The Green Ribbons is about Hephzibah, orphaned at eighteen, and thus compelled to become a governess. She is ill prepared for the life she is thrust into. How will she cope – with a lecherous employer, his attractive son and in a village going through great changes?

9) What are you working on at the moment?

I’m writing a sequel to The Chalky Sea – my first ever sequel. Usually I want to move on from the characters once I finish a book, but I felt I had unfinished business to explore and as this will be set in Canada it feels fresh to me.

I love travelling – visiting new places. I used to be more adventurous – far flung continents and physically challenging activities – but now I prefer staying closer to home – ideally within Europe. I’ve had my fill of long haul flights – well for the moment anyway.

I love to paint and always take sketchbooks and paints away with me.

My other pastime is quilting. My first-ever quilt features on the cover of Letters from a Patchwork Quilt. Recently I’ve become rather taken by baking – a bit of a surprise to me as I always thought I’d hate it! I’m just about to make a lemon drizzle cake. 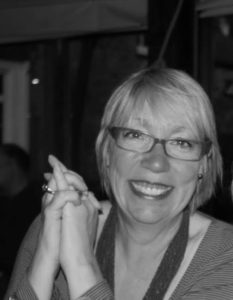 Where can we find more about The Chalky Sea and about Clare Flynn, the author?

Or my Amazon page http://author.to/clareflynn

Best of all sign up for my occasional emails ­– I don’t bombard people with them – just when I have some important news to share or a great offer or giveaway. If you sign up – on the home page of my website you will immediately receive for free my collection of short stories A Fine Pair of Shoes.

Thank you so much, Clare, for your interesting answers and for agreeing to be the first author in my New Book Releases blog series! I cannot wait to read the sequel to The Chalky Sea, which I’m reading and enjoying immensely at the moment!