I was lucky enough to be invited to a book launch at The Embassy of Iceland last night. The event was celebrating the publication of the English translations of two new Nordic Noir titles from the Finnish ‘King of Helsinki Noir’ Antti Tuomainen and bestselling Icelandic author, Lilja Sigurdardottir.

An award-winning playwright, Lilja Sigurdardottir has written four crime novels, with Snare, the first in the series, hitting bestseller lists worldwide. The film rights have been bought by Palomar Pictures in California.

Trap, the newly published sequel, set in Reykjavik, is dark, fast-paced and has a chilling plot and intriguing characters. I was delighted to discover this new Nordic Noir title and to be able to speak with the author herself last night.

A romance with some drug dealing and death thrown in

The charming Lilja told me last night that, in spite of its obviously Nordic Noir theme, the book is also “A romance between two women, with some drug dealing and death thrown in”.

I cannot wait to read both of these books!

I’ve been a fan of Antti Tuomainen since I discovered his previous title, The Man Who Died, an international bestseller, shortlisting for both the Petrona and Last Laugh Awards. The book is full of dry humour combined with some serious crimes. The tone of Antti’s prose is uniquely Finnish, yet the themes are universally recognizable with the characters’ lives – their dreams and relationships – laid bare for the reader.

Palm Beach Finland is described by the publisher, Orenda Books, as “Fargo meet’s Baywatch”. I couldn’t agree more with this, one of the better elevator pitches I’ve heard. With a nod to Fargo, and the darkest Noir, Palm Beach Finland is both a page-turning thriller and a wicked black comedy about lust for money, fleeing dreams and people struggling at turning points in their lives.

As well as the title of the novel, Palm Beach Finland is a resort aimed at those holidaymakers who love the beach vibe but hate the heat. A concept that surely cannot but succeed in the chilly North? But in the sleepy Finnish town where the ambitious new owner of the holiday spot has some grand plans for the future of his business venture, a mysterious death has occurred. As the local police fail to solve the case, Jan Nyman, an ace detective of the covert operations unit of the National Central Police is called to investigate. The main suspect is Olivia Koski, a woman in her thirties, disappointed in love and looking to settle back home in her late father’s house. Her property is the centre of some strange goings-on, including a murder and the burning down of a sauna.

If you want to get a Finn’s attention , if you want to tell your compatriot something vital and important , you burn down his sauna. – Palm Beach Finland by Antti Tuomainen, Oreda Books

I cannot remember when I highlighted so many sections in a book I’ve read. Palm Beach Finland is full of beautiful little snippets like the one above. I laughed out loud, cried and smiled my way through this book and cannot wait to see what Antti writes next! 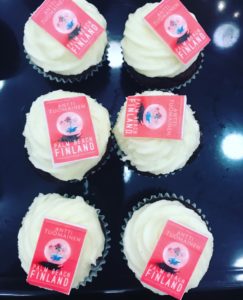 The book launch at the Embassy of Iceland was such a fantastic event, with a happy, interesting crowd (many of my friends from the Finnish Embassy, not to mention the Anglo-Finnish Society, were there too) and to top it all, there were some bookish cupcakes.

I just hope my own book launch for The Christmas Heart tomorrow will have some of the magic of last night. (Sadly, I cannot promise there will be cakes topped with icing featuring the cover. Where are the British Bake Off experts when you need them?) 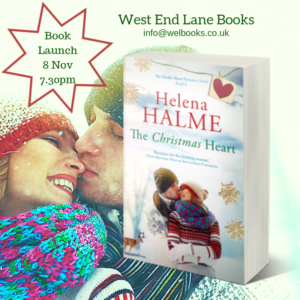 If you’d like to attend the launch, please email or phone West End Lane Books now, or join us tomorrow night in West Hampstead in London at 7.30pm!